The detachment of centralized, physical planning processes to local realities has led to urban development taking place without plan consideration, which resulted in a high percentage of informally developed and unplanned areas in cities. Such development took place both on state-owned and agricultural land.

At the same time, inner city areas were neglected and turned into derelict and unsafe neighborhoods. Informal development, undertaken by families and small informal developers, takes place in the largest cities as well as in secondary towns and villages. Buildings are generally structurally adequate, however, infrastructure is lacking and over-loaded, streets are too narrow and often unpaved, public spaces are very scarce or non-existent, and public services are severely lacking.

Since the 1970s and ‘80s, there have been attempts to regularize informal development by adopting several laws, statutes and decrees. However, they had limited success due to a combination of tangled bureaucracy and weak institutions resulting in a lack of enforcement, excessive land fragmentation, strong sharia traditions enabling relatively secure tenure of informal housing, and a lack of appropriate instruments to promote planned development of peri-urban land. Moreover, the government’s initiative of building new cities has not provided a successful alternative to informal development. Pilot examples of formal housing communities, such as Haram City in the Sixth of October, or provision of planned, subdivided and serviced land by the Government for guided land development in the same area demonstrate that such alternatives are not attractive to everyone. The formal turn-key development is only affordable to the lower middle class and up; the government land for development is allocated in remote desert areas away from the economic opportunities. On the contrary, the informally developed areas, despite their shortcomings in living standards, have proven to create an inclusive, vibrant economic environment.

The Housing, Urban Renewal and Informal Settlement Upgrading Programme aims to address the challenges of adequate housing for all while providing access to basic urban services, as well as to prevent and upgrade informal and unsafe areas in Egypt. It provides technical advisory services to both national and local levels with the aim of building the necessary capacities at institutional and legislative levels to plan and implement inclusive, integrated and sustainable cities in Egypt.

The project is based on a thorough human security analysis and its implementation follows a multi-sector approach for protection and empowerment. From a human security standpoint, the Human Security Forum (HSF) is a key empowerment mechanism to enhance community engagement and participation in local development. The HSF aims to establish an encouraging environment for local actors to take the lead in elaborating and implementing community-owned priority development interventions. The main task of the HSF is to articulate a holistic community action plan, support the design and select priority projects at the village level based on multi-dimensional human security analysis. It is composed of local stakeholders, including community leaders, representatives of local non-governmental organizations (NGOs), youth, and women as well as representatives from local government. Its establishment and mandate is coordinated with local executives and representatives at the Markaz and village levels. As a sustainability strategy, the project will work on creating a bottom–up planning mechanism through linking the HSF with the governmental functioning bodies. The project will address Minya governorate to assign a focal point to act as a communication channel between HSF on Markaz and village levels and the decision makers at governorate level. The role of the focal point will be liaising between the HSF and the governorate to ensure that communities are aware of the planning priorities of the governorate and that needs of the community are reflected in the governorate’s plans. In particular, UN-Habitat has been assigned to increase economic security through capacity development of local members on urban upgrading, apply vocational training that leads to employment creation, and establish a youth volunteering service to assist in raising community awareness of HS issues.

This joint project aimed to explore the condition of public spaces regarding safety of women and girls in order to propose and implement key interventions that enhance the safety and prevent violence against women and girls in public spaces. These interventions included physical enhancements to public spaces, targeting the community (perpetrators and victims of violence), community leaders, religious leader organizations such as al-Azhar and the Coptic Church, duty bearers such as governmental officers in different authorities, and others.

The project employed an integrated community-based approach to address issues and forms of violence against women and girls in the public spaces. It works with and through members of the community to foster ownership and ensure sustainability as well as mobilize all levels of the community to change existing stereotypes and social norms fueling violence against girls and women in public spaces and to prevent and respond to various forms of violence. Moreover, the project worked closely with local government, which has a key role in addressing public demand to reduce violence against women and girls. The project developed the capacity of local authorities, communities, the private sector and other relevant institutions and organizations and build constructive dialogue and partnership between local government and the community-based organizations to ensure gender equality in the planning, designing and management of safer public spaces within the community.

The key partners included the General Organization for Physical Planning, the Ministry of Interior, Ministry of Justice, Ministry of Health, Cairo and Giza Governorates. The Safer Cities Project is a joint project between several UN agencies, including UN-Habitat, UNDP, the United Nations Population Fund, UNICEF, the United Nations Office on Drugs and Crime and coordinated by UN Women. The implementing partners at neighborhood level are local NGOs, coordinated by CARE Egypt. Among other donors, the project is funded by UN Women.

The overarching purpose of this project grouping is to improve the quality of life for Egyptians through the creation of safe neighborhoods and communities that are free from violence against women and girls. In order to ensure ownership and sustainability of the intervention, the joint initiative between UN-Habitat and Plan Egypt employed an integrated community-based approach to address issues and forms of violence against women and girls in public spaces.

This strategy mobilized all levels of the community to change existing stereotypes and social norms fueling violence against girls and women in the public spaces, and to prevent and respond to various forms of violence. The project worked closely with girls and women in order to strengthen their capacity to claim rights and hold duty bearers accountable for their safety and inclusion in cities, as well as actively engage boys and men as champions of change on girls’ safety in cities.

The key partners included the General Organization for Physical Planning, Cairo Governorate as well as community-based organizations. The project was funded by Plan International as part of a Global Programme.

The inclusive city is a place where everyone, regardless of their economic means, gender, age, race, ethnicity or religion, is enabled and empowered to fully participate in the social, economic and political opportunities that cities have to offer. Participatory planning and decision-making are central to inclusive and sustainable urban development and growth. Besides, inclusive urban governance not only reduces inequality and social tension, but also incorporates the knowledge, productivity, social and physical capital of the poor and disadvantaged in city development, as well as increasing local ownership of development processes.

Young people are catalysts for development and agents of change. To unleash the power of youth, the project partnered with various initiatives that focus on the empowerment of poor and marginalized urban youth to become active citizens and participate in decision-making processes that concern their lives, such as the demand for better services. They monitored the use of public resources and hereby positioned themselves as key agents. A major emphasis was on adolescent girls and young women and the creation of opportunities at the neighborhood level for enhanced social dialogue.

The project aimed to increase the capacity of local governments and community groups - particularly youth and women - to practice good urban governance, which is characterized by the interdependent principles of sustainability, equity, efficiency, transparency, accountability, security, civic engagement and citizenship.

The key partners included the General Organization for Physical Planning, Cairo and Giza Governorates as well as community-based organizations. The project was funded by the Ford Foundation.

The recent conflict in Syria has led to over 2.5 million refugees; over 100,000 of whom are registered in Egypt. The impact of refugees on urban communities has caused considerable strain. In areas of the city where refugees have settled they compete with poor local residents for scarce resources and limited services and, as such, they are vulnerable to aggression, violence and exploitation. Egyptian residents in these areas have very similar needs for assistance and support initiatives as the refugees. So far, the joint engagement of local government and relevant key stakeholders (community-based organizations and private sector) is still limited. In order to support host communities and refugees alike, UN-Habitat implemented multiparty local area upgrading activities (refugee and host community) related to buildings, infrastructure and service provision that respond to community needs and would enhance the provision and access to basic urban services. The objective of the project was to develop and support an urban environment that encourages collaboration and community life among Egyptian and Syrian refugees through raising awareness at national and local levels, while supporting the upgrading of urban areas.

The key partners included community-based organizations of both host and Syrian refugee communities, as well as Cairo Governorate. The project was funded by the United Nations High Commissioner for Refugees.

The overall objective of the project that will be implemented in Asyut governorate is to improve the quality of life for all urban residents and competitiveness of highly dynamic cities while at the same time protecting the environment and climate and conserving resources. This will be achieved by promoting trans-sectoral planning in organizations and decision structures for social, environment, resource and finance management. In order to meet this overall goal RP aims to develop a generic trans-sectoral planning methodology for sustainable urban basic structure services and environmental and resource management for fast growing cities.

The key partners include the General Organization for Physical Planning, Asyut governorate; Asyut University and eight German Universities. The project is funded by German Federal Ministry of Education and Research. 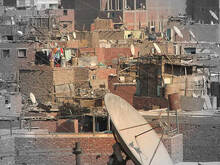