Highlights for Monday, 27 May 2019, UN-Habitat Assembly

On Monday, the inaugural UN-Habitat Assembly (UNHA 1) started its deliberations at the UN Office at Nairobi (UNON), Kenya. Delegates elected Martha Delgado Peralta, Mexico, as President of the Assembly, as well as regional Vice- Presidents, members of the Executive Board, and other officers, and adopted the meeting’s agenda and rules of procedure. Throughout the day, several platforms were opened, including the Urban Solutions Expo, the City Stage, and the Youth Tent. 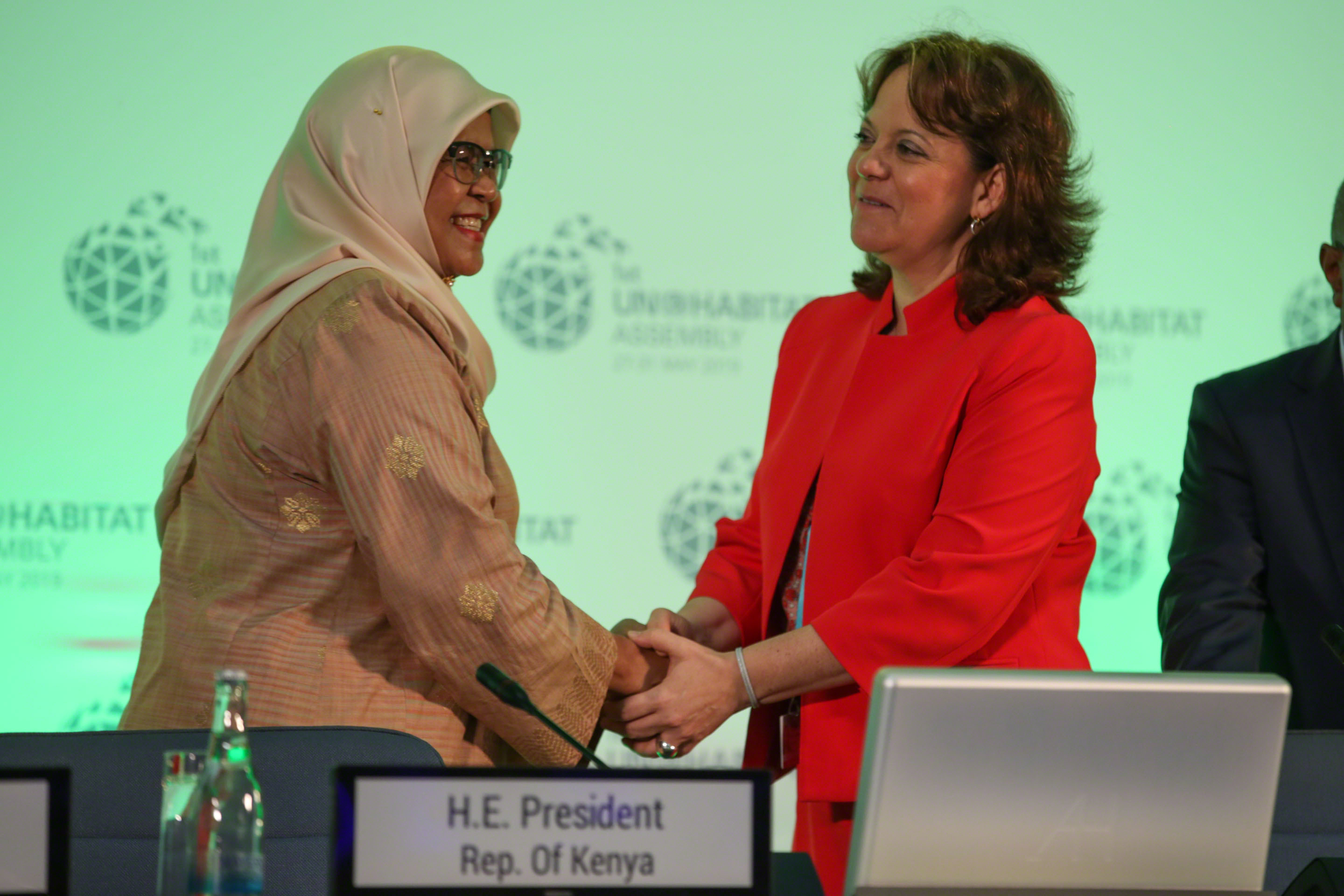 Convening of the first UN-Habitat Assembly

Emma Stevens, Indigenous Youth Representative from the Mi’kmaq Indigenous Peoples, Canada, paid tribute to women in her community who lost their lives due to unsustainable development practices, and drew attention to the loss of traditional languages, calling for greater efforts to conserve them.

Election of the UN-Habitat Assembly President 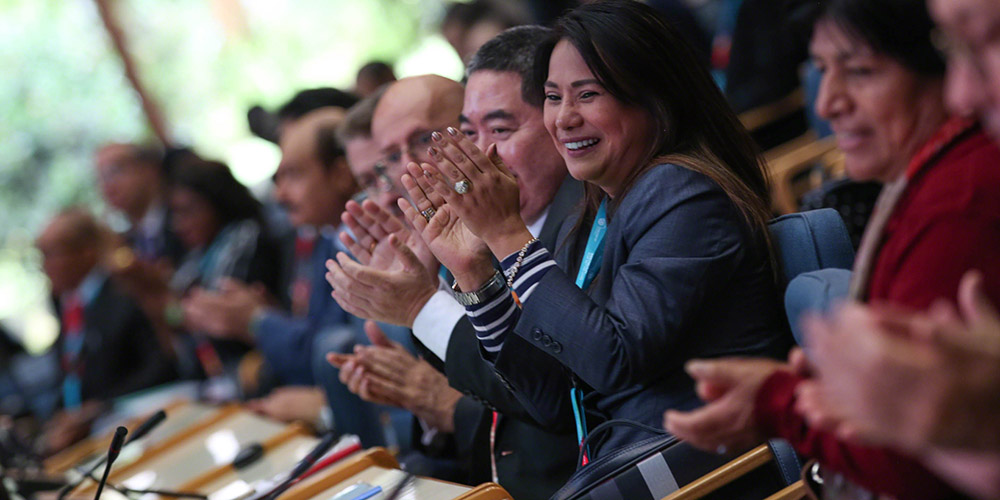 Delegates applaud the election of the new UN-Habitat Assembly.

Shipra Narang-Suri, Coordinator, Urban Planning and Design Branch, UN-Habitat, underscored the UNHA as “a new chapter in the organization’s history,” noting that more than half of the world’s population lives in cities and is connected to the internet. She stressed the need to reduce digital inequality and emphasized the importance of green, open, public spaces, directly linked to the Sustainable Development Goals (SDGs), in particular target 11.7 (universal access to safe, inclusive, green spaces). Narang-Suri then introduced an innovative way to enhance stakeholders’ participation in redesigning green spaces at the UN Headquarters in Gigiri, using the videogame Minecraft in that respect.

Maimunah Mohd Sharif, Acting Director-General, UNON, and UN-Habitat Executive Director, highlighted UNON’s role as the only UN Headquarters in the developing world, drawing attention to work on infrastructure and efforts to become a more environmentally friendly compound, including through eliminating single-use plastics.

UN Secretary-General António Guterres, via video message, stressed that the first UNHA comes at an important juncture as 60% of the urban infrastructure needed by 2030 is yet to be built. He emphasized that well planned cities can facilitate economic growth and sustainable low emission development. He further cautioned that unplanned urbanization can generate severe problems, such as pollution, crime, inequality, disease, vulnerability to disaster, lack of affordable housing, and harmful emissions, urging for ambitious and concrete solutions to overcome these challenges. 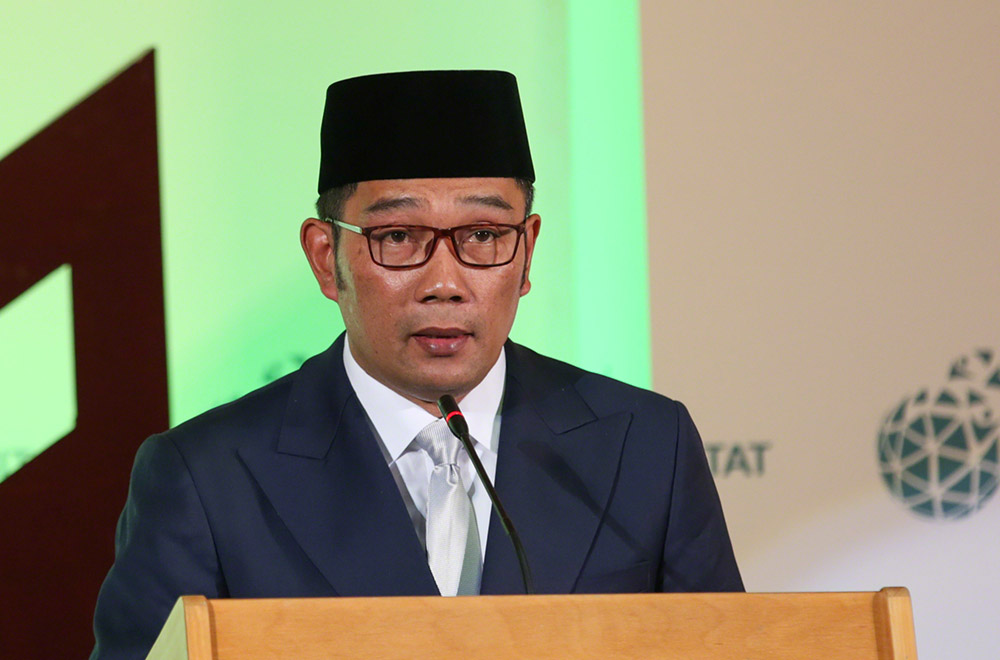 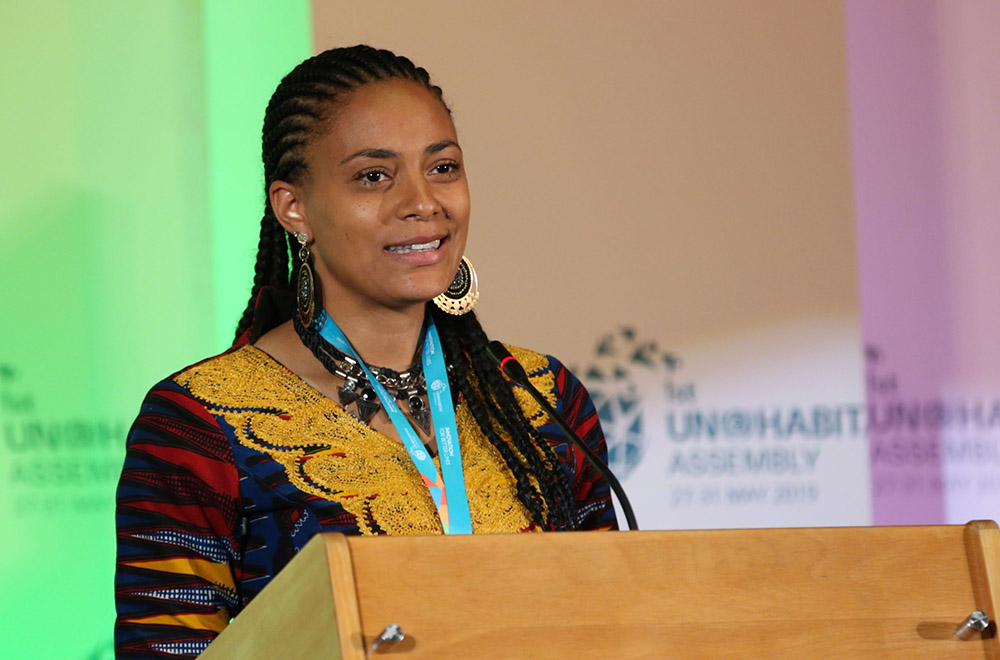 Sona Jobarteh, UN-Habitat’s Goodwill Ambassador, The Gambia, reflected on what successful urbanization entails and how it could be developed sustainably. She underscored the importance of culture and the need to reflect it in communities’ social values. She called for a change in mentality and understanding, stressing that sustainability entails more than “new shiny buildings” and extends to knowing what is going on inside.

UN-Habitat Executive Secretary Sharif highlighted three priorities: well-planned and better managed cities; the need for transformational and ground-breaking innovation for a better quality of life; and a resourced and impact-driven UN-Habitat. On the impact of UN-Habitat’s work, she pointed out that more than two million people have improved access to water and sanitation and 53 cities in 30 countries, have benefited from state-of-the-art design solutions. 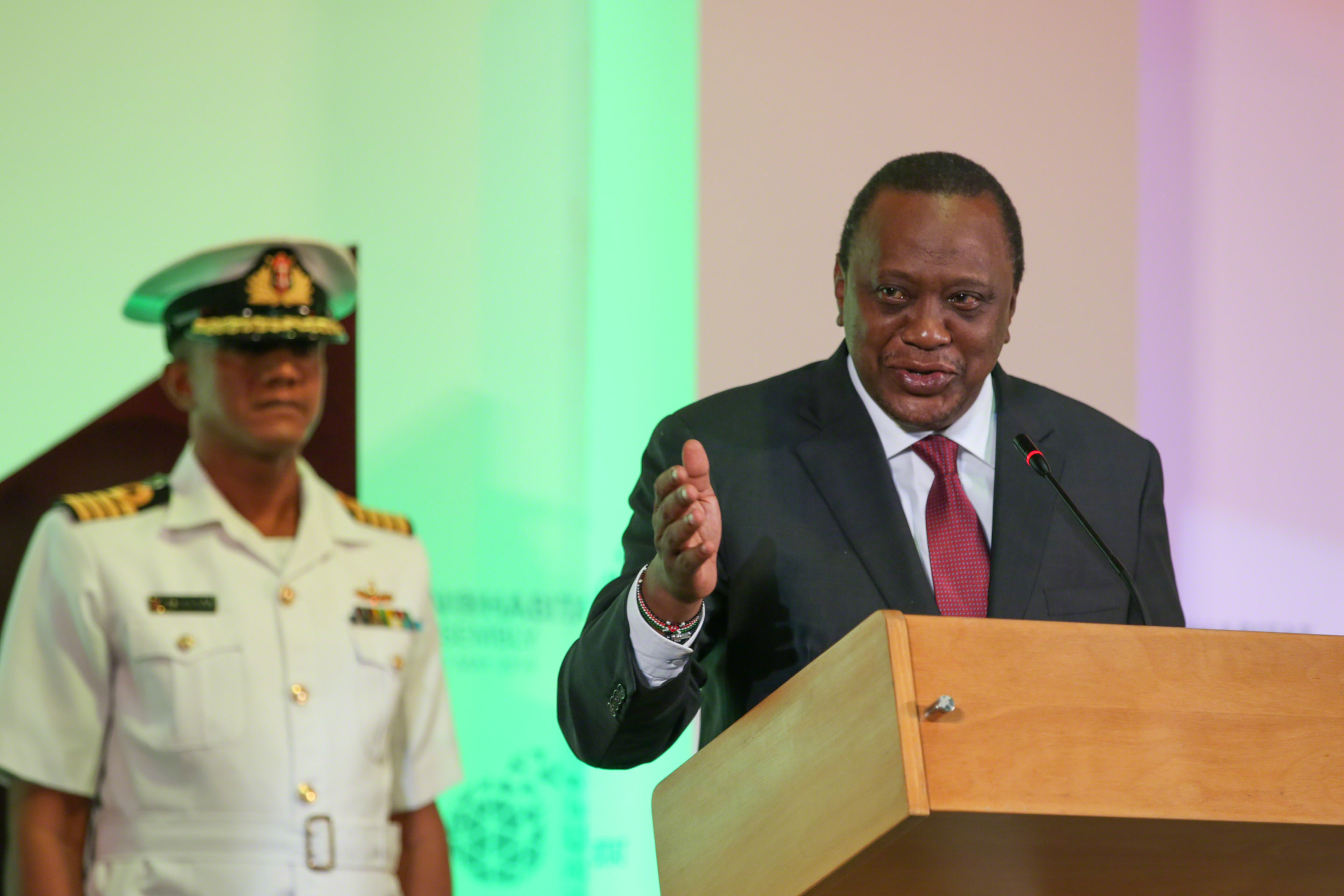 Uhuru Kenyatta, President of Kenya, stressed that UN- Habitat’s new governance structure lifts the organization’s status to a universal body. He emphasized that the world “is currently ill-prepared to plan effectively for rapid urbanization,” noting that many countries have seen a proliferation of slums and informal settlements, urban poverty, and increased environmental degradation. President Kenyatta called for collective international action informed by technological innovations to “transform our cities into engines of sustainable economic growth and development.” He called for overcoming institutional constraints and ensuring the necessary capacity- and resource-base for UN-Habitat to deliver its mandate. He further outlined national efforts to implement the New Urban Agenda under four key priority areas, including mortgage funding, universal health care, affordable housing, and infrastructure development, and stressed Kenya’s commitment in supporting UN-Habitat’s work. 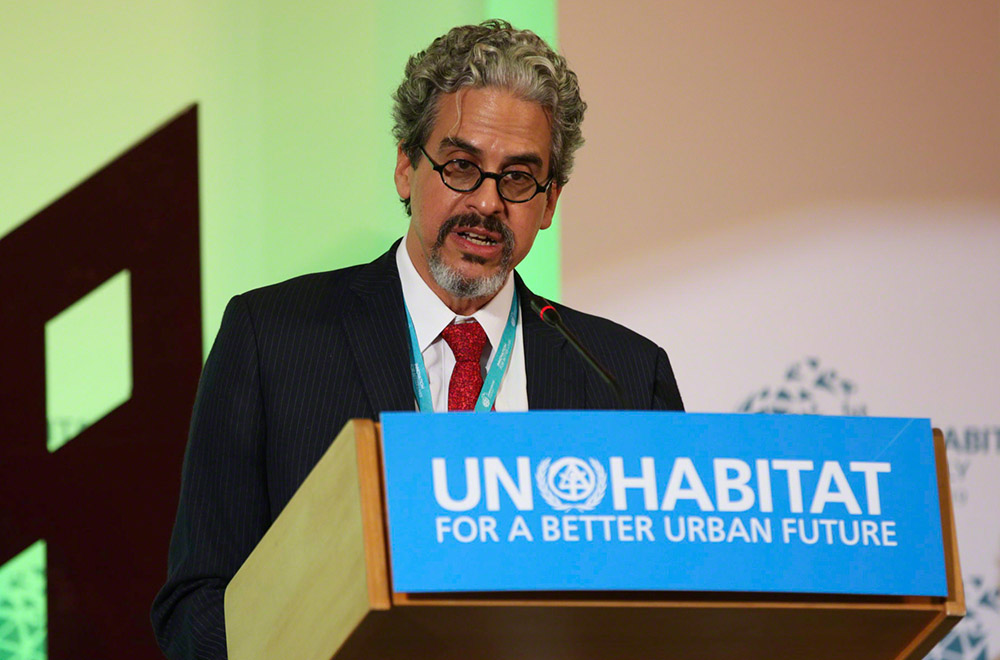 Report of the Committee of Permanent Representatives

Fernando Coimbra , Brazil, Chair of the Committee of Permanent Representatives (CPR), presented the Committee’s report recommending that the Assembly: adopt the rules of procedure; elect the CPR Bureau for 2019/21; elect the Assembly Bureau for 2019/21; and also consider the draft rules of procedure for the Executive Board. He noted that draft resolutions on the strategic plan for 2020-25, UN system-wide guidelines for safer cities, and on enhancing capacity building had been forwarded to the Assembly for consideration; and that the first session of the Assembly would send a strong political signal through a ministerial declaration. Coimbra recommended that the Assembly consider: shortening the Strategic Plan cycle from six to four years; and extending deliberations on stakeholder engagement and accreditation.

Lori Dando, US, reported on stakeholder accreditation and engagement discussions, noting that, despite progress and hard work, a draft stakeholder policy had not been finalized and recommended continuing discussions to reach consensus.

Delegates then adopted the rules of procedure (HSP/HA/1/8) and the provisional agenda (HSP/HA/1/1) with the inclusion of the CPR Chair’s report.

For the UNHA 1 Bureau, delegates elected China as rapporteur; as well as Germany and Ghana as Vice Presidents. The Central and Eastern European (CEE) region will submit their nominee at a later date.

The Assembly also elected, on an exceptional basis, the CPR Bureau with CEE nominating Serbia, and the Group of Latin American and Caribbean (GRULAC) countries nominating Costa Rica as Vice-Chairs. The AFRICAN GROUP announced Eritrea and Tanzania’s nomination to Chair the CPR, with Eritrea chairing for one year and Tanzania for the rest of the term. The ASIA-PACIFIC region and WEOG will submit nominations at a later date.

Delegates agreed that the UNHA bureau will also act as the Credentials Committee.

Organization of work, including the establishment of an Executive Board and the adoption of its rules of procedure

Election of the members of the Executive Board

President Delgado recalled that the Assembly has been mandated to elect 36 members to the Executive Board. The Assembly will return to this issue at a later date.

President Delgado proposed, and delegates agreed, to forward the Board’s rules of procedure to the Executive Board for their consideration, noting that these rules will be endorsed by the Assembly thereafter. The Executive Board will hold its first meeting on Thursday, 30 May 2019. 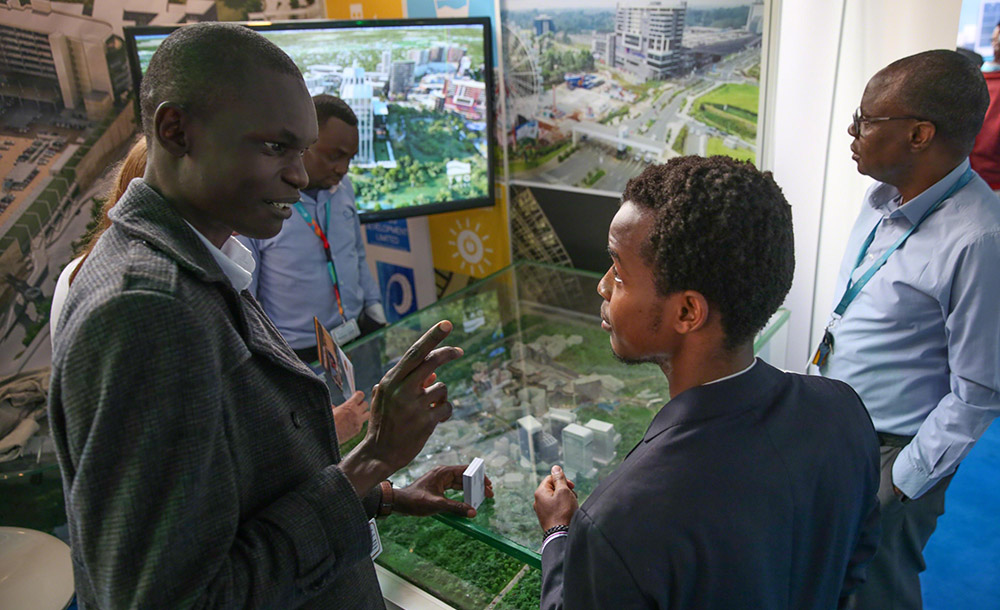 Delegates discuss new ideas at one of the information booths

Activities of the UN Human Settlements Programme, including coordination matters

organizations, and other UN-Habitat partners (HSP/HA/1/2/ Add.2); and draft guidelines on safer cities (HSP/HA/1/2/ Add.3). She further noted that the report should be read in conjunction with the country activities report (HSP/HA/1/INF.3).

Sharif highlighted that in the new strategic plan 2020-2025, activities have been consolidated into four domains of change: reducing poverty and spatial inequality in urban and rural communities; enhancing the shared prosperity of cities and regions; strengthening climate action and improving the urban environment; and effectively preventing and responding to urban crises.

She further addressed relevant progress regarding nine resolutions adopted by the Governing Council at its 26th session, as well as the new governance structure for UN- Habitat. She stressed that the new strategic plan seeks to reposition UN-Habitat as a center of excellence and innovation, with adequate financial resources being a prerequisite for implementation.

Executive Director Sharif presented her report (HSP/ HA/1/4), recalling the adoption of the 2030 Agenda for Sustainable Development as a global vision for people, the planet, and long-term prosperity, as well as the adoption of the New Urban Agenda at Habitat III in 2016, as a new framework to plan and manage cities to achieve sustainable development.

Highlighting climate change, transport, housing, and governance as the greatest challenges in the pursuit of sustainable urbanization, she underscored four main themes to address them: reinvigorating governance and civil society participation; reinforcing financial mechanisms; capacity development; and technology and information.

Executive Director Sharif stressed that the New Urban Agenda forms the basis for the implementation of the urban dimensions of the 2030 Agenda for Sustainable Development, emphasizing well managed urbanization as a transformative force and an engine for inclusive economic growth. She underscored that, despite progress on both Agendas, key concerns remain around: growing inequality in cities; climate change with cities being responsible for 60-80% of energy consumption and 70% of greenhouse gas emissions; and conflicts, crises, and urban insecurity.

She urged for accelerating the implementation of the 2030 Agenda and the New Urban Agenda, by focusing on normative work, catalyzing networks of partners, and transforming cities through knowledge, policy advice, and collaborative action.

Sharif concluded by stressing that the world is at a “life- changing crossroads,” requiring urgent collective action to reduce exclusion and inequalities in the world’s cities and communities.

The EU expressed support for the new UN-Habitat governance structure, noting that all the conditions had been met for UN-Habitat to accelerate the implementation of SDG 11 (sustainable cities and communities). She underscored gender equity and social inclusion as key priorities in cities and a people centered approach to leave no one behind. Outlining various EU initiatives, she noting that: the first urban agenda is being operationalized with 14 partnerships and 11 action plans; and an EU International Urban Cooperation Programme promotes city to city cooperation in 127 cities.

Palestine, on behalf of the G-77/CHINA, reiterated the importance of the New Urban Agenda and the need to contextualize future projects to address short and medium-term priorities, and underscored the centrality of the Addis Ababa Action Agenda on financing for development.

KENYA highlighted their support for the meeting, including a contribution of USD 500,000 for the participation of least developed countries, and called on UN-Habitat to guide states in the implementation of the New Urban Agenda. The RUSSIAN FEDERATION invited delegates to World Cities Day to be hosted in Yekaterinburg on 31 October 2019.

MOZAMBIQUE noted that the country has a cities and climate change policy to address climate-related risks, as well as a national housing policy to promote climate resilient buildings. Noting the new momentum for urban development, SENEGAL called for the means of implementation to ensure sustainable urban centers in all countries. He also highlighted the country’s urban development policy. 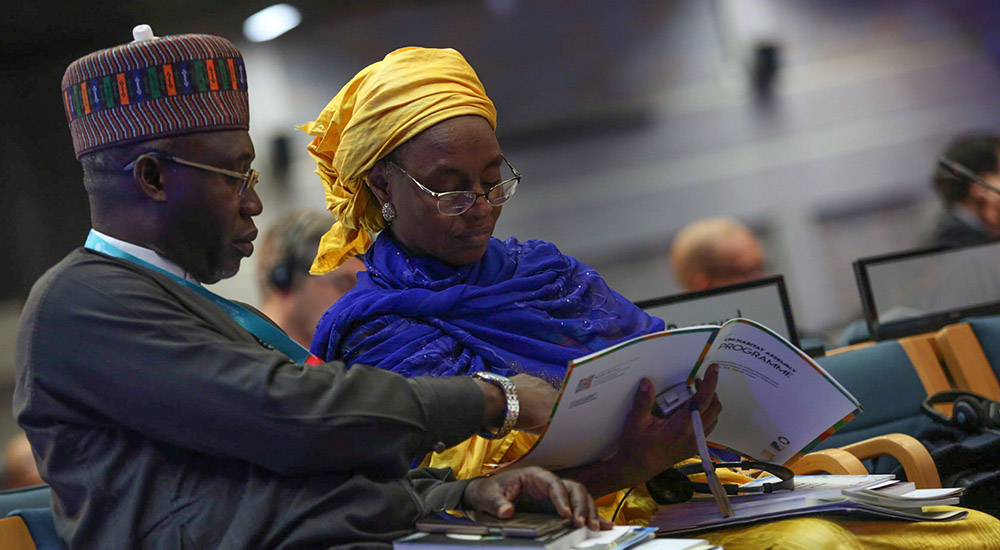 Delegates speak informally before the start of plenary

Throughout the day, several platforms were opened, including the Urban Solutions Expo, the City Stage, and the Youth Tent.

This text was written and edited by Asterios Tsioumanis, Ph.D., Asheline Appleton, & Tallash Kantai from the International Institute for Sustainable Development (IISD).

All photos on this page are by IISD/ENB | Kiara Worth

For more IISD images from the UN-Habitat Assembly please go to http://enb.iisd.org/habitat/assembly/1/attrib/