Harsh Realities: Marginalized Women in Cities of the Developing World 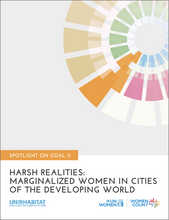 Share
601
Views
171
Downloads
232
Likes
Abstract
Today, more than half the world’s population (55 per cent) live in urban areas, a share projected to reach 68 per cent by 2050. The rate and scale of urban growth presents daunting challenges, including the need for investments in transportation, housing, sanitation, energy, and social and physical infrastructure. Where these investments are lacking, a greater number of individuals will be forced to live in areas that lack durable and secure housing, and that are cut off from essential services, such as clean water and sanitation. Globally, the number of people living in slums – neglected parts of cities characterized by poverty and substandard living conditions – is growing. The latest estimates put the number of slum dwellers worldwide at over 1 billion people – one sixth of humanity. Women face multiple forms of discrimination in their everyday lives; they have an increased risk of poverty and limited negotiating power and access to resources. They also endure the greatest hardships resulting from the proliferation of under-resourced and often spatially segregated urban areas. Despite the wide-ranging implications of this phenomenon, gender profiles of urban slum residents are scarce, with a limited focus on the deprivations faced by women in slum and slum-like settings. In signing the 2030 Agenda for Sustainable Development, world leaders pledged to eliminate poverty, reach those furthest behind, and achieve gender equality and empower all women and girls (Goal 5). They also promised to address the need for adequate, safe and affordable housing and basic services among slum dwellers and those living in informal settlements (Goal 11). A global indicator framework has been developed to monitor the 2030 Agenda and track implementation of its 17 Goals and targets. This framework, while highly ambitious, still fails to address the gender dimensions of informal settlements in an integrated manner. The analysis on the following pages discusses this gap and argues for an integrated approach. It presents new insights into the sex composition of slums and the adverse outcomes experienced by women in these settings. This analysis, based on data from 59 low- and middle-income countries in Latin America and the Caribbean, Central and Southern Asia, and Sub-Saharan Africa, finds that women and their families bear the brunt of growing income inequality and failures to adequately plan for and respond to rapid urbanization. The data show that in 80 per cent of countries analysed, women are overrepresented in urban slums among those aged 15 to 49.4 At the root of this phenomenon are gender-based inequalities that limit women’s access to education, rights to housing and asset ownership. Gender inequalities also make it more difficult for women to engage in paid work, largely because they bear greater responsibility than men for unpaid care and domestic work.
Download
Publication Year
2020
Number of Pages
17 pages