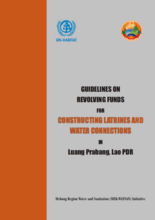 Urbanization is placing an enormous burden on many secondary towns in Lao PDR, which will become ever more onerous as we move to the MDG target year of 2015. Urban areas are growing at 4.9 per cent in Lao PDR.

The vast majority of the new urban citizens are poor, newly arrived rural migrants. They invariably have to pay higher prices for their water or use unsafe water, as well as endure unsanitary conditions.