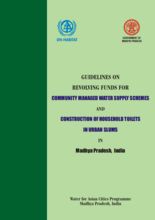 With rapid urban development, the gap between demand and supply in the water and sanitation sector is widening, imposing stress on the basic infrastructure facilities by the urban local bodies, which often fails to address the growing demand. In the process, the urban poor suffer the most and are forced to live under unhygienic conditions in slums and shanty areas, lacking in basic amenities.

The efficient use of existing resources and community participation are imperative to make increased water and sanitation coverage. The problem is more predominant in Asian countries who are ill equipped to provide the needed safe water and sanitation to their growing population. The levels of investments in the sector within the region are quite inadequate to bridge the widening demandsupply gap and to extend services to low income and the needy population. External investments into the sector are inadequate. Most governments are increasingly becoming aware of the significance of domestic mobilization of funds.