On December 13, 2018, the Global Alliance for Urban Crises, UN-Habitat and Bureau Technique des Villes Libanaises hosted a consultation entitled “Adapting Humanitarian Response in Urban Contexts: Regional Consultation on Key Instruments - Middle East”. This joint consultative event brings together all Global Alliance constituencies providing the opportunity to contribute to the knowledge products currently being developed by the Global Alliance working groups. The overall aim of this event is to ensure the views of the different constituencies are properly reflected in the products and foster peer-to-peer exchange amongst humanitarian, development, academic, local authority representatives, and built environment specialists engaged in urban crises.

In his welcome remarks, Mr. Tarek Osseiran, Program Manager of UN-Habitat, stressed on the importance of this event that builds on the exchange of views of different constituencies in Lebanon. Mr. Osseiran said, “Today, the event is one of a series of consultations organized by the Alliance with the aim to better understand the dynamics between local governments and humanitarian agencies during and in the aftermath of urban crises.” He continued, touching on UN-Habitat’s interventions post the Syrian refugee crisis, “As UN-Habitat Lebanon, and since the outbreak of the Syria refugee crisis, we were convinced that local governments should be in the driving seat, leading and facilitating the response within their communities. When we realized that the implication of the crisis was even worse on cities and their poor neighborhoods, the Programme promoted analytical and technical tools that helped local governments better understand the serious risks that resulted from increased vulnerabilities.”

In his intervention, Mr. Philippe Lazzarini, UN Resident and Humanitarian Coordinator for Lebanon, praised the efforts made to convene this meeting and reiterated the importance of collaboration and commitment to respond to the challenges pertaining to the Syrian refugee crisis. He stated, “as UN system and humanitarian actors, we are here to support national governments in their primary responsibility to address the needs of those affected by a humanitarian crisis and to help support governments in their development trajectory towards achieving the SDGs. This means aligning humanitarian action and development work so we are able to address acute needs while at the same time fast-tracking recovery.”

The full day event included presentations from members of the Alliance working groups, local authorities, and international agencies to share their experiences and lessons in preparing for, responding to and recovering from urban crisis in the Middle East and North Africa. Participants were actively engaged in the feedback sessions for the knowledge products. Their discussions provided the basis for making the Alliance's work relevant to the region and facilitated the way forward for the Alliance's respective areas of work including strengthening the engagement between local authorities and humanitarian actors, the Urban Competency Framework, urban profiling in crisis settings, and building resilience in the aftermath of urban crises. The final knowledge products will be published in February 2019 at a launch event in Geneva, Switzerland. 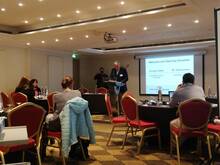