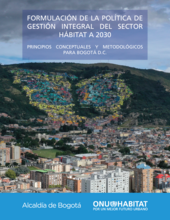 Share
14
Downloads
120
Likes
Currently, in Latin America, 78.0% of the population lives in cities, mainly in the capitals. This trend is also experienced by Colombia, with the great advantage that said population concentration is distributed in a system of 64 cities with more than 100,000 inhabitants, being Bogotá, in addition to the country's capital, the most important agglomeration. The effects of rapid urbanization in the country and the continent have made it possible to improve the coverage and access of large majorities to the goods and services of economic and social development, but it has also created new challenges, particularly for large metropolises. That is why the right to the city today acquires great relevance to guide public policies and the different forms of citizen participation. The consideration that adequate housing as a basic unit for habitat construction represents an essential element of the right to the city and invites emphasis on its transformative attributes of quality of life and sustainable and inclusive urban development. The concept of habitat becomes more important because it addresses housing not only as an individual or family right but as a collective right of those who inhabit and enjoy cities. The common challenge today is how to produce a habitat that helps "build a city." For this, it is necessary to move from housing policies to habitat policies, which consider the environments, plan the territory and the equipment and break the barriers of socio-spatial segregation. For this reason, UN-Habitat proposes to return the “Housing at the centre” which should be understood not only as the centre of public policies, but also as the physical centre of cities, since construction in the peripheries not only does not responds adequately to the needs of the most disadvantaged groups, but the dispersion decreases, among others, the same productivity of the cities and their cohesion. Linked to this, the quality of housing and cities also depends on the ability to massively introduce alternatives to ways of building and the use of new materials. Eco-efficiency and eco-sustainability in the production of housing and habitat infrastructure not only improves the quality of life of urban dwellers and the resilience of cities but also generates new economic, work and innovation opportunities. In all these areas, Bogotá represents a reference for the rest of Colombia. Not surprisingly, in the capital, about 2.7 million homes demand services with coverage and quality, being a huge challenge primarily for rulers and decision-makers. Therefore, the importance of a robust habitat policy by 2030, which undoubtedly contributes to providing conditions that boost housing supply and other habitat attributes, as well as access and opportunity in a context of equity, inclusion and prosperity. This publication is a contribution to the formulation of this policy, under the leadership of the Habitat District Secretariat - SDHT. The results of the interdisciplinary work between UN-Habitat and the SDHT reveal disparities in the coverage and quality of housing, equipment and general habitat conditions between different areas of the city, so the achievements to come must translate into conditions of equity, cohesion, and prosperity for all citizens, taking into account the context of Bogotá and its metropolitan environment.