Sanamxay District, Lao PDR, 16 November 2020 – Houses that were reconstructed with Japanese funding following severe flooding two years ago were handed over to local residents at a recent ceremony.

Ambassador Keizo Takewaka of Japan and senior government officials from the national, provincial and district levels went to Sanamxay district, Attapeu province, to participate in the handover ceremony.

The UN-Habitat project, “Rehabilitation and Reconstruction of Housing Sector in 2018 Floods Affected Areas of Lao PDR” provided permanent houses and community-level piped water to the people whose houses and livelihoods were destroyed and who suffered from disrupted basic services during the devastating floods of 2018. The floods led to the collapse of a dam in the area.

More than 6,000 people were forced to move into neighbouring villages and temporary shelters as a result.

At the handover ceremony, Japan’s Ambassador congratulated UN-Habitat on the successful completion of the project, noting that  “disaster risk reduction is one of the major pillars of Japan’s development policy and national policy… [and] I am very pleased to learn that Building Back Better principle has been adopted in the construction of the houses.”

The Vice Governor of Attapeu province, Mrs. Minaphone Xayxomphou expressed her gratitude for the support provided by the Government of Japan and UN-Habitat saying “it is a great relief for these families to finally be able to move into their own houses.”

The ceremony was attended by the Governor of Sanamxay District, Mr. Soulivong Aphaivong, and several senior officials from the Ministry of Public Works and Transport, village chiefs and more than a hundred of people from the most affected communities.

The visit concluded with a visit to one of the two projects sites where the houses have been constructed based on the Building Back Better principles. The newly constructed homes have elevated floors and solid foundations to withstand the recurring natural disasters in the area. 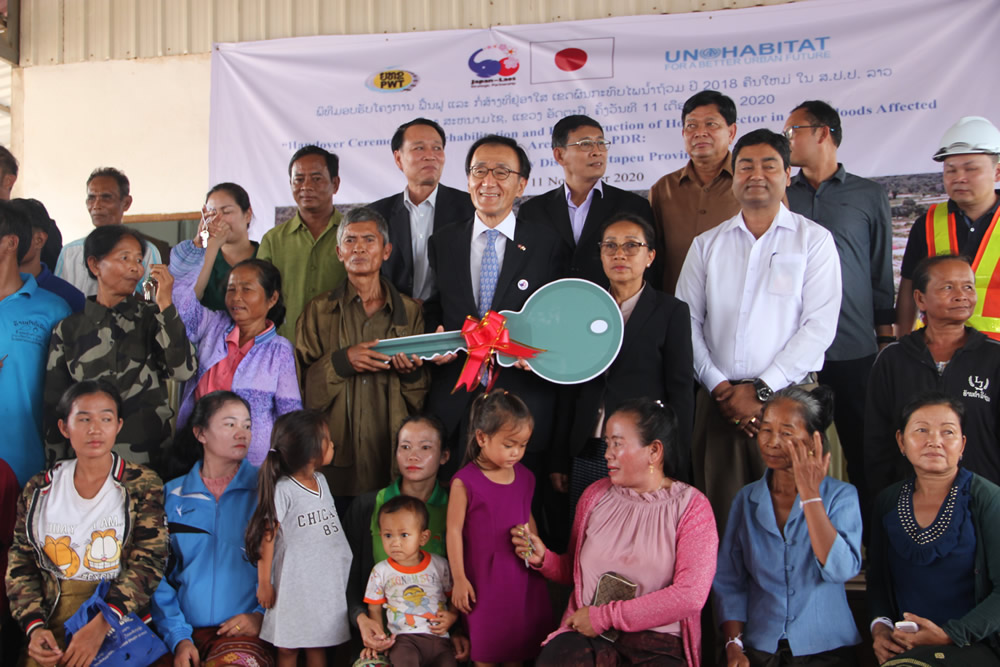