Ekaterinburg, Russia, 31 October 2019 – The first ever Global Observance of World Cities Day in Russia attracted participants from over 40 countries to explore how innovations can improve the lives of urban residents now and in the future.

During the high level opening session, UN-Habitat’s Executive Director, Maimunah Mohd Sharif, said innovation was often born in cities and should be used to improve life for everyone.

“Imaginative ideas will allow us to be more efficient and effective in the way we manage our resources, we move people and goods, deliver our services and construct our infrastructure and buildings,” she said referring to this year’s World Cities Day theme - Changing the world: Innovations and a better life for future generations. 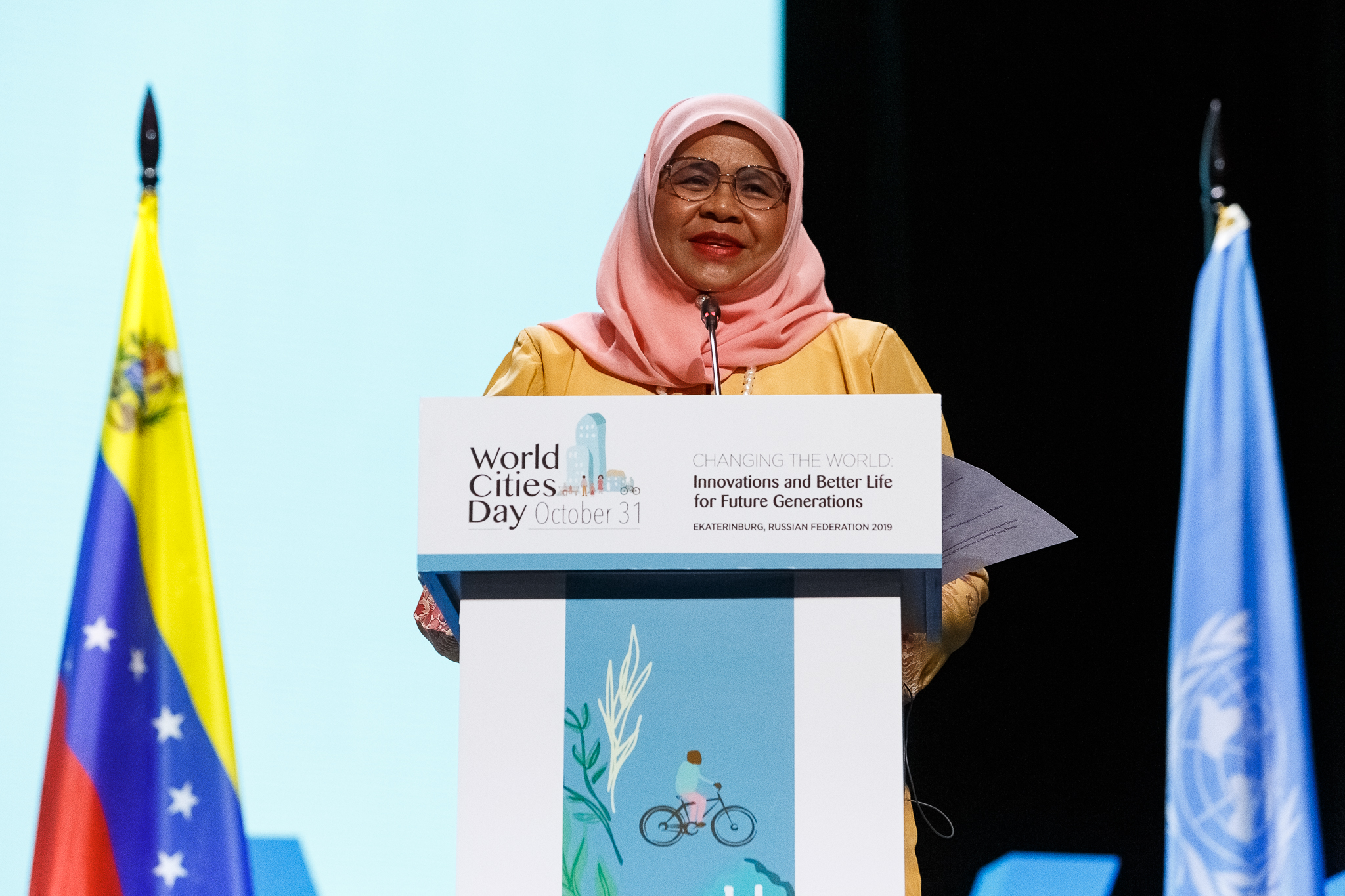 Several speakers at the event, which attracted over 650 participants, mentioned the importance of involving the residents of cities. The Minister of Construction, Housing and Utilities of the Russian Federation, Vladimir Yakushev called for people to unite their efforts and creativity to transform their cities.

“I hope this World Cities Day will provide us with new possibilities and give us new energy to resolve problems of our cities for their sustainable development and improvement of living conditions,” he said.

The Mayor of Ekaterinburg Aleksandr Vysokinskiy, pointed out that technology “is a tool not a target, and that the future of a city depends on its population.”

The Head of the United Nations Information Centre in Moscow, Vladimir Kuznetsov, read the statement of the UN Secretary-General, Antonio Gutérres, which declared that the climate battle would be won or lost in cities.

“From electric public transport to renewable energy and better waste management, many of the answers needed for the transition to a sustainable, low-emission future are already available,” the Secretary-General stated.

Venezuela’s Minister for Housing and Habitat Ildemaro Moisés Villarroel Arismendi, pointed out the need to make technologies accessible to everyone.

“Technologies will be successful when they affordable and we will do our best to make housing affordable and allow people to choose the place where they live,” he said.

Mr. Jiang Wanrong, Vice Minister of Ministry of Housing and Urban-Rural Development of the People’s Republic of China said that good city planning and the interests of people should be the top priority to make cities inclusive.

The UN-Habitat Executive Director, the Mayor of Ekaterinburg Aleksandr Vysokinskiy and the Deputy Director-General of Shanghai Municipal Housing and Urban-Rural Development and Management Shanghai, Zheng Zhang, launched the 2019 edition of the Shanghai manual standing next to a plastic replica of the manual which, after a count down, lit up. 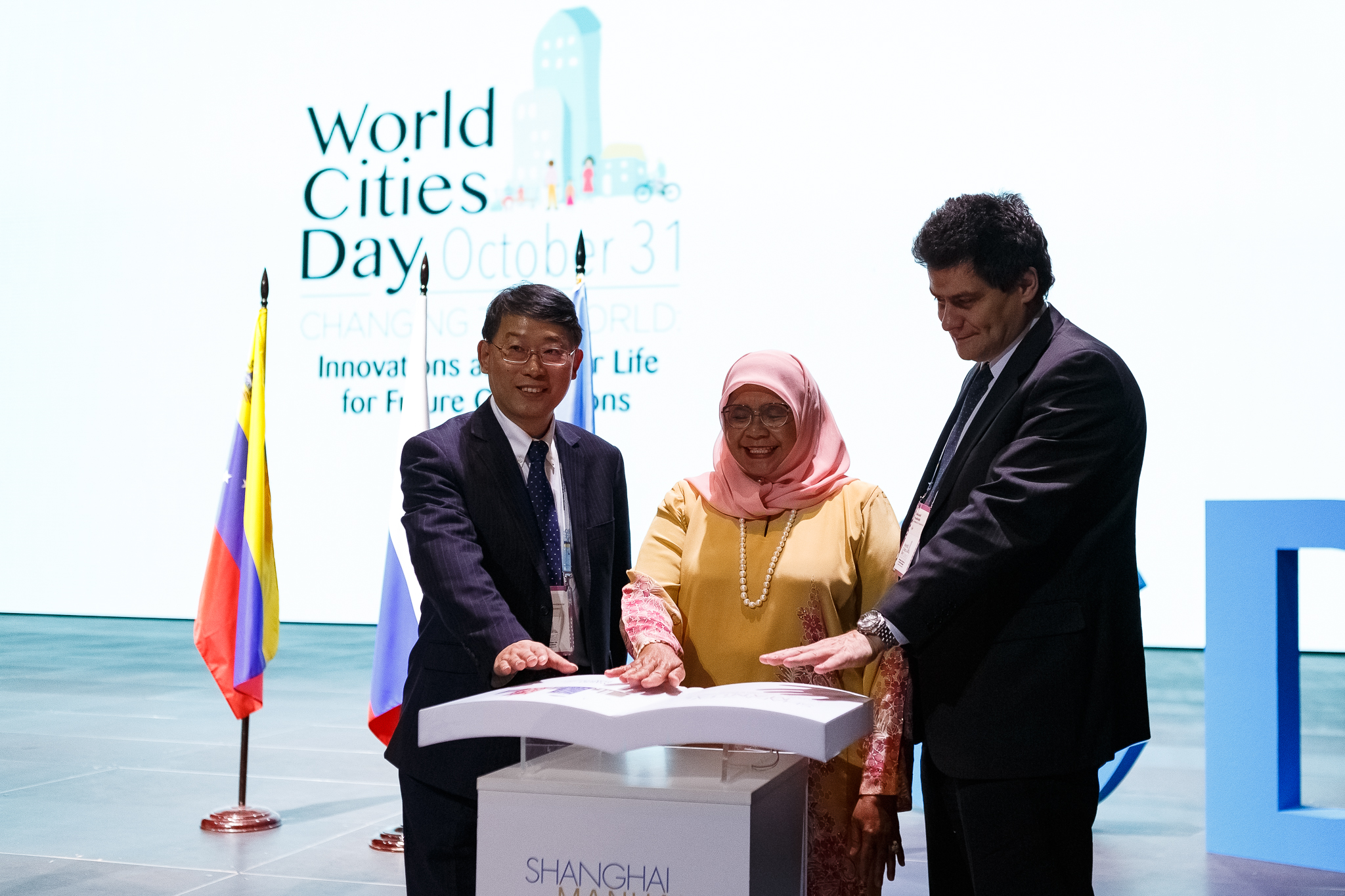 Following the high level opening, there were presentations and discussions about the themes of the workshops of the previous day including from the youth, followed by a live link to World Cities Day celebrations in Bilbao, Spain, Istra, Moscow region and the UNESCO Headquarters in Paris.

During the Bilbao link up, the Vice Counsellor of Territorial Planning of the Basque Government, Arantza Leturiondo said it was a positive sign that so many youth had taken part in their discussions as they would build the cities of the future. She saw the video link up as a positive way of overcoming borders and boundaries adding “let us build the future of our cities together.”

Following presentations from representatives of United Nations agencies based in Moscow, a specialist from Future Foresight from Abu Dhabi’s Strategic Planning Division, Maha Al Dhaheri spoke about the links between the two days of discussions on World Cities Day and the upcoming Tenth Session of the premier global meeting on sustainable urbanization, the World Urban Forum (WUF) which will take place in Abu Dhabi in February

“Events such as World Cities Day and the World Urban Forum create an ideal platform to bring key stakeholders together to influence and shape future of sustainable urbanization,” she said, inviting the audience to attend the meeting.

The UN-Habitat Executive Director closed the Global Observance of World Cities Day saying there was a lot of work to be done and she hoped participants all exchanged ideas, heard about useful best practices and would continue talking and networking. “This is the beginning not the ending,” she said to loud applause.

[UN-Habitat]
We’re rebuilding! If you can’t find what you’re looking for, please check the old website.