For the first time, a Children’s Assembly has been held at the World Urban Forum to highlight the needs and wants of our cities’ youngest and often most vulnerable citizens.

The session opened with the language of music led by Esteban Arredondo. Joyati Das, Senior Director of World Vision Urban COE, opened proceedings by saying that as a child, she wanted to grow up quickly in order to have a voice and influence other people. “Here, today”, she said, “children have an oppoortunity to be listened to.”

During the assembly, the young delegates represented their thoughts on urban issues in art, painting and constructing their dream cities. A representative from the Education Ministry of Medellín talked with the children about their future dream jobs. Edy Patricia Trujillo García from Buen Comienzo and Viviana Limpias from UNICEF Colombia said that today the children need to be teachers and teach us about their dreams and joys.

At the same time, former Mayor of New York City and UN Special Envoy on Cities and Climate Change, Michael Bloomberg, opened a lively Business Assembly which welcomed renowned leaders in the private sector to discuss their roles in working with city government and improving cities.

The speakers and panelists emphasized the key role of the private sector in establishing trust and positive relationships with government in order to achieve collective, measurable improvement in cities. The Assembly ended with a signing ceremony between UN-Habitat and the International Mayors Communications Center, Grupo Argos, and Microsoft, in which the partners agreed to collaborate with the agency on their respective areas of expertise.

The Youth and Gender Assemblies saw among their largest numbers come together to discuss the issues facing marginalised sections of urban society, while celebrity Colombian singer, Juanes, launched the Colombian arm of the I’m a City Changer campaign to excited fans. 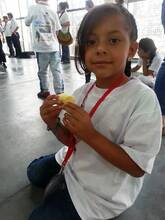 Dana Sofia is 5 years old and says that she would like to have more parks in her city where she can play.
Categories
MEDIA CENTRE
News