Barcelona, 21 May 2014: Fifty-five international experts on urban development and security gathered in Barcelona for a two-day meeting on the Urban Safety Monitor; a new initiative that promotes the use of indicators for evidence-based policy and practice. The Expert Meeting was organized by UN-Habitat with the support of the City of Barcelona.

Held in the Sant-Pau complex, the meeting analyzed the relationship between urban governance and planning and citizen security, with the aim of developing safety indicators to be tested in a number of pilot cities. Prototype indicators will serve local governments in cities like Beirut and Port Moresby to set urban safety targets, benchmark progress, demonstrate accountability, and strengthen political commitment.

Prototype indicators developed during the Expert Meeting will be presented in mid-2014 as field trials in the pilot cities commence. The Urban Safety Monitor will be closely aligned with other signature UN-Habitat research and analysis initiatives, such as the City Prosperity Index.

Barcelona’s experience promoting a safer city was at the centre of the presentations and discussions. Over the past 25 years, the city has pioneered the use of indicators to understand and respond to the dynamics of urban safety.

The meeting was opened by the former mayor of Barcelona and current Executive Director of UN- Habitat, Joan Clos, and by Barcelona’s current Deputy Mayor, Antoni Vives i Tomas. Both speakers highlighted the vital relationship between good urban planning and safety, with Dr Clos pointing out that "good planning helps to increase the chances of safe coexistence."

Ultimately, the Urban Safety Monitor will not only generate data for tracking and analysis, but serve as a platform for cities to share knowledge and experience, and enable local governments to collaborate in advocating for an evidence-based policy agenda on safety issues. 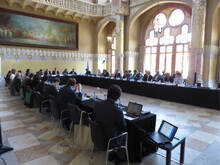