Fukuoka, Japan, 12 November 2014: Over 35 experts met from 11 to 12 November 2014 in Fukuoka, Japan to finalise the drafting of international  guidelines on urban and territorial planning . In accordance with the Resolution 24/3 of UN-Habitat Governing Council, the experts will submit the 20 page draft Guidelines for consideration and further transmission to the 25th Governing Council of UN-Habitat in April 2015.

In her opening remarks, Ms Christine Platt, Chairperson of the Ad Hoc Expert Group Meeting recalled the statement of Ban Ki-moon, UN Secretary General in April 2012 in New York: “Our struggle for global sustainability will be won or lost in cities” She further stressed that the proposed Guidelines would set a key pathway for how this battle can be fought in order to achieve sustainable urbanization.

Participants recommended that the proposed Guidelines be considered as an significant tool to highlight the importance of sustainable urbanization in to the Post-2015 Development Agenda as well as the Third United Nations Conference on Housing and Sustainable Urban Development (Habitat III), scheduled to take place in 2016.

They produced the Fukuoka Communiqué that endorsed the outcomes of the inclusive and participatory processes. The participants came from Africa, America, Asia and Europe. They were nominees from national governments, local authorities such as the United Cities and Local Governments (UCLG), development partners including the World Bank, United Nations Centre for Regional Development (UNCRD), United Nations Centre for Regional Development (UNITAR) and Organisation for Economic Co-operation and Development (OECD).

Others were from associations of planners including the International Society of City and Regional Planners (ISOCARP), research and academia, and civil society organizations.

The Expert Group Meeting that took place in Fukuoka, Japan on the 11-12th November 2014 was the third of a series of events. The first meeting took place in Paris, France (24-25 October 2013) and the second one took place in Medellin, Colombia (10 April 2014), in conjunction with the 7th session of the World Urban Forum.

Download International Guidelines on Urban and Territorial Planning Flyer in English and French. 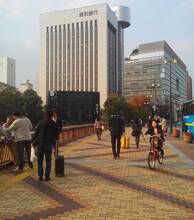