Dire Dawa 25 November 2014—The government of Ethiopia held its sixth edition of the National Urban Forum from 15th to 22nd November 2014 at Dire Dawa city under the motto “our cities being centres for enterprise development, will ensure the renaissance of Ethiopia”. The event was attended by high ranking government’s high level officials including the President of the Federal Republic, Dr. Mulatu Teshome , the Deputy prime Minister, cabinet ministers, regional officials and mayors. It was organized by Minister of Urban Development, Housing and Construction, Dire Dawa City Administration and Ethiopian Cities Cooperation Platform. The forum was structured in three ways: panel discussion, plenary discussion and exhibition. Panel and plenary discussions were led by different urban specialists from different universities in the country where UN-Habitat has also taken part.

Objectives of the forum

In his speech, the Minister of Urban Development, Housing and Construction Mr. Mekuria Haile outlined the objectives of the forum as follows:

UN-Habitat participated in two panel discussions and two plenary sessions during which Mr. Roi Chiti presented the relevance of the new urban agenda at country level and the process leading to Habitat III. The Ministry showed interest in the Ethiopian participation in the global process that will work towards consolidation of the National Urban Forum into a permanent multi-stakeholders platform for debate on policy and programming at the urban level.

Urban Good Governance and Housing were the two thematic areas where Prof. Fantu Cheru and Ms. Fernanda Lonardoni presented principles and best practices on their respective areas. Each session was attended by more than 120 leaders and urban agenda specialists. 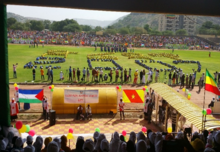