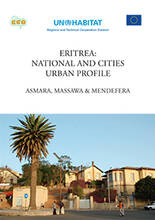 Urban Profiling is an assessment of needs and capacity building gaps at the city level. It is currently being implemented in over 20 countries in Africa and the Arab States. Urban Profiling uses a structured approach where priority interventions are agreed upon through consultative processes.

(3) project implementation. RUSPS in Eritrea encompasses a national profile, and a single profile for the cities of Asmara, Massawa and Mendefera. This national report constitutes a general background, a synthesis of the four themes, Governance, Slums, Gender and HIV/AIDS , and Environment, and priority project proposals, both at national and city levels.