Nairobi, 20 November 2014: The importance of empowering local authorities to enable them to implement concrete changes to urban development has been highlighted at a recent meeting of more than 1,000 representatives of national, state and local government in the Gujarat city of Gandhinagar.

Speaking at the Municipilka conference during an official visit to India, UN-Habitat Executive Director, Dr. Clos addressed key leaders of local authorities from across the country and highlighted the importance of developing capacity at the city level to enable municipalities to deliver on services and urban development.  This is proving to be a challenge in India, as in many countries, where resources and implementation are largely controlled at the national level.

In the sidelines of the summit, Dr Clos also had official meetings with Mr M Venkaiah Naidu and Ms Anandiben Patel in which he congratulated India on its ambitious and vital programmes on urban development that were recently announced by the Prime Minister.  He offered UN-Habitat’s full support in implementing the projects.

At the summit, held in Gujarat under the theme Building Vibrant Cities, Dr. Clos also met with winning students of the Urban Innovation Challenge who presented ideas in two categories: Green Buildings and Habitats on the micro scale; and Sustainable Cities and Townships on the macro level.

The winners included ideas for how to tailor the concept of smart cities to the local level and a concept for urban refuse recycling. 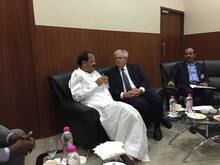 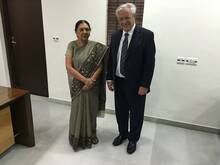