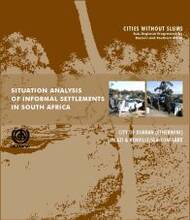 The objective of the Situation Analysis is to present the state of slums and slum upgrading in selected wards in Umlazi and Kenville/ Sea Cow Lake, and the effectiveness of past and ongoing upgrading initiatives, within the framework of the overall city development strategy and national poverty reduction program.

Two key focus areas were selected in order to pilot alternative strategies because of their unique characteristics and having the largest number of informal settlements, Umlazi and Kenville/ Sea Cow Lake. Umlazi a formal township including the Umlazi Glebe area and portions of the tribal authority areas west of the proclaimed township.

The study area forms part of the eThekwini Municipal area. Kenville/ Sea Cow Lake lies in the northern part of eThekwini Municipality borders the light industrial and commercial complexes along the North Coast Road activity spine. There are six informal settlements comprising approximately 2 000 families, which have been earmarked for an upgrade in the area.