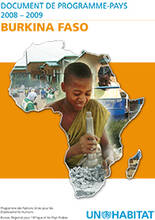 Following the model of the other agencies of the United Nations System, the 2008 – 2009 UN-HABITAT Country Programme has its sources within the national priorities defined by the Poverty Reduction Strategic Framework. It falls under the United Nations 2006 – 2010 Plan jointly elaborated by the resident and non resident UN agencies with the representative entities of the national counterpart.

The elaboration of this document was an exercise carried out within a participatory process involving all the principal actors of the concerned sectors as well as official and non State authorities. The situation analysis emphasizes the fact that Burkina Faso has one of the world’s most vulnerable populations whose capacities to react to economic crises are low.