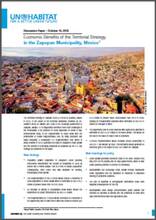 The Territorial Strategy of Zapopan 2030 (ETZ2030 in Spanish), issued in 2015, is the output of the technical assistance provided by UNHabitat’s office for Mexico and Cuba to the municipal government of Zapopan, Mexico.

ETZ’s diagnostics identified three main challenges in the municipality:
i) the pressure of urban expansion on areas of high environmental value;
ii) the fragmentation of urban areas with the proliferation of closed neighborhoods; and,
iii) rising economic and social inequality.

A subsequent ETZ Implementation Plan, which is being finalized in 2018, quantified the costs of Zapopan’s urban sprawl and the benefits of controlling expansion as proposed by the ETZ. Key findings are presented in this paper.