On behalf of the entire UN-Habitat family, I would like to express my deep and most heartfelt condolences to the family, friends and colleagues of Jockin Arputham, President of the National Slum Dwellers Federation in India and the Slum Dwellers International (SDI), who passed away on 13 October 2018.

Jockin gave a much-needed human face to the global urban agenda. Through over forty years of tireless active engagement, improving the quality of life of slum dwellers around the world, he introduced fundamental paradigm shifts and fought against the stigmatization of slum dwellers. He demystified slum dwellers’ living conditions, tore down the barriers of exclusion, negative stereotypes and introduced the concept of a slum-friendly city and society.

Jockin unified slum dwellers globally through establishing slum dweller organisations and federations across the world, enabling their ability to collectively express their needs and rights. He demonstrated that slum dwellers are important stakeholders in driving transformational change, especially in improving living conditions in slums. In this respect, in Africa and Asia, Jockin introduced countless innovative partnerships between people, local and national governments, communities, international organizations and the private sector.

As President of the Slum Dwellers International, Jockin was an invaluable partner of UN-Habitat, and we are dedicated to ensuring the continuation of his legacy.

His efforts earned him global recognition, including winning the Ramon Magsaysay Award for Peace and International Understanding in 2000. In 2011 the Government of India bestowed on him its fourth highest civilian honour, the Padma Shri Award. In 2014 he was nominated for the Nobel Prize in Peace.

Jockin’s extraordinary contribution to humanity, particularly his dedication to local entrepreneurship, participation and fundamental human rights lent voices to millions of people around the world.

He was a visionary of his time, foreseeing and demonstrating the crucial linkages between slums and the rest of the city. He understood that slum dwellers needed to be included in the fabric of the city to create enabling conditions for sustainable urbanization and shared prosperity to occur.

A charismatic, engaging and selfless activist, a man of the people, an authentic grassroots leader and most of all, an extraordinary human being and beloved friend, Jockin will be missed dearly. May he rest in eternal peace. 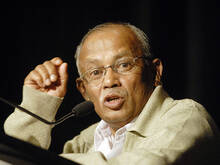