Vice Chairman of Quang Nam People’s Committee - Mr.Le Van Thanh, representatives from the leaders of Binh Dinh and Da Nang cities, experts, and researchers in the field of urban development had attended the workshop.

During the workshop, many discussions focused on the solutions for implementing the given criteria in the Tam Ky’s overall plan to 2030, vision to 2050, such as: enhancing the excitement, attraction of the urban center, developing public transportation, specifically, to increase the number of people using public transport by 30% in 2030; developing agriculture-forestry-fisheries in a sustainable manner by applying advanced production technology, safety methods; Improving the living environment for people.

Some experts believe that there are many plans, but they are not suitable in the market economy, wasting resources; lack of cohesion, lack of consistency, still has overlapping and conflict. Mr Nguyen Quang – the manager of UN- Habitat in Vietnam, said that City Development Strategy with community-based participatory is considered as a planning mechanism which focused on local autonomy, with full participation from stakeholders.

“The strategy is designed to integrate with all other plans that we currently have, associated with the development of multi-sector investment and the more inclusive city development strategy, for poverty reduction, economic development, and environmental protection and improve living quality for people,” he said.

Mr Kazuya Motomura from Fukuoka City shared the successful models of green city development in Japan, as well as the regeneration models to create the environment which is more green, and working with nature, with involvement from communities, such as: technologies which turn sea water to fresh water; Sustainable agriculture-forestry-fisheries and safety hydraulic system; retrofitting landfills in Vietnam and Japan; using the abandoned landfills and transferring technology and education.

In concluding remarks, Mr Van Anh Tuan, Chairman of Tam Ky city said that “We hope, in the future, we can have more supports from Fukuoka city as well as other organisations to complete the strategy of Tam Ky toward green and smart city, which can boost the economy, create more jobs for local people while still protect the environment future generations”. 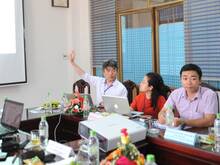