Cairo, 15 December 2014 – UN-Habitat Executive Director, Dr Joan Clos, has met with Mr Ibrahim Mahlab, Prime Minister of Egypt, during an official visit to the country to promote the importance of sustainable urban planning and development in economic progress.

Dr Clos spoke at the First Arab Forum on Sustainable Communities & Green Building and attended a roundtable debate for Ministers and Governors  involved in urban development. He also met with representatives of urban think tanks, civil society academics and practitioners.

During his meetings, Dr Clos iterated that, done well, urbanization has the potential to drive development. Urbanization brings about the proximity of people, and in doing so creates opportunities for the exchange of goods and services which in turn generates business and economy.  The effectiveness of cities in driving development depends on appropriate planning, with sufficient public space, connectivity, density and mixed uses; appropriate normative arrangements with the right legislation and governance systems; and finance mechanisms.

A new urban agenda for Egypt

However, to do this, countries need to adopt a New Urban Agenda when considering planning and urban design.  Through integrating principles of urban planning, urban economy, urban management and legislation the New Urban Agenda seeks to create economically vibrant cities that are socially inclusive and environmentally sustainable.

Dr Clos also emphasized the need to empower local government, which is best placed to meet the needs of urban communities. He articulated that this does not necessarily imply the decentralisation of central resources, which is often a challenge in less wealthy countries, but should enable local government to develop their own revenue systems and to provide local services effectively. He urged strengthened collaboration across relevant ministries, and between central institutions, local institutions and communities, under a common vision that will harness the potential of urbanization to drive development and increase GDP. 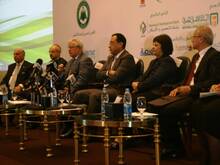