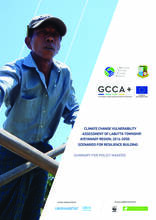 In 2016 the Myanmar Climate Change Alliance (MCCA), implemented by UN-Habitat and UN-Environment, on behalf of the Ministry of Natural Resources and Environmental Conservation, conducted a detailed climate change vulnerability assessment of Labutta Township, in collaboration with WWF and Columbia University.

Labutta is located at the southern tip of the Ayeyawady Delta Area region in Myanmar and is home to approximately 315,000 people. Characterized by a deltaic environment, it has a predominantly flat topography, and suffered greatly in terms of damage and lives lost from Cyclone Nargis in 2008. Labutta is still struggling to recover from its effects, especially in rice production.

The study analyses current vulnerabilities, and by projecting changes in climate, anticipates further vulnerabilities in the future up to 2050. Three scenarios for the future of Labutta are envisaged, taking into account the potential impact of climate change and the required adaptation and mitigation action. Recommendations are issued to avoid the worst case future scenario A, which is currently the most likely.