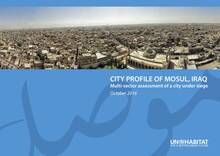 The United Nations Human Settlements Programme (UN-Habitat) in Iraq has published a comprehensive urban analysis on Mosul, Iraq’s second largest city and the focus of an international military campaign to liberate it from occupation by the terrorist group that calls itself “Islamic State of Iraq and the Levant (ISIL).”

The report includes a comprehensive mapping assessment of the city’s infrastructure, housing, social services, and demographics to help in planning humanitarian and development assistance in the highly sensitive and volatile context of ISIL’s conflict with the Government of Iraq.

The report underlines the factors that contributed to ISIL’s occupation of Mosul in June 2014. It shows how decades of neglect, migration, and frustration with slums and poor services created a situation where popular animosity was so great that, for all intents and purposes, Mosul fell to insurgents long before 10 June 2014.

Informal settlements increased significantly after 2003 due to a shortage of affordable land allocated for housing, lack of services and infrastructure investment, corruption, and poor governance. Some of these settlements became “self-ruled zones,” incubators for extremism and radicalism.

The city profile also describes the further deterioration of conditions in Mosul after ISIL occupation and allied air attacks as new families migrated into the city from Syria and other parts of Iraq. Facilities for education, health care, water, sanitation, electricity, and communications services were damaged or severely restricted by ISIL.

New environmental and health hazards, along with the remaining cultural and archaeological sites, are also mapped in the study to advise humanitarian and development actors planning to enter the city after liberation.

It is estimated that between 50 and 75 per cent of the city’s governmental buildings are destroyed; these include public directorate, university, and public utility buildings. This will place additional burdens on stabilization, reconstruction and developmental responses in Mosul. The report warns about other potential sources of post-liberation conflict due to the displacement of rightful property owners. It is feared that “property mafias” will emerge to take advantage of the situation. Given this, property ownership issues could create flash points between individuals and communities in the early liberation period in Mosul.

Given the importance of stabilizing Mosul after liberation, this report is an important guide for UN agencies, programmes, and funds working with the Government and donors to develop and implement targeted programmes that will address the most critical short- and long-term gaps and grievances in a city with an estimated population of 1.4 million.

The assessment includes several recommendations that could be elaborated when the full extent of damage and needs are known after liberation. UN-Habitat has just signed an agreement with UNDP to continue monitoring the urban changes during and after campaign to liberate Mosul, and will continue to update the information through UN-Habitat Urban Data, its global web portal featuring city data and urban trends.