Lattakia is a major Syrian city situated on the Mediterranean Sea, Lattakia is an important port playing an essential role in the imports and exports for Aleppo (Syria's industrial capital) and for the Syrian Eastern Region. In 2010, the Syrian Central Bureau of Statistics (CBS) estimated the population of Lattakia City at approximately 425,500 inhabitants.

The City Profile provides a pre-2011 baseline and current situation data to describe the impact of the crisis accompanied by narrative description and analysis. 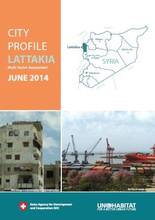