Homs is the third largest city in Syria, after Aleppo and Damascus. The precrisis population of Homs was approximately 800,000. The city was well known for its integration of multi-cultural communities, as it received a big proportion of migrants from all the surrounding rural areas before the crisis.

Waves of migrants formed the city's eastern part (mainly informal settlements) while the historical Homs community remained in the center of the city and expanded westward. The City Profile reviews the functionality of the city economy and services, presents an understanding of capacities and coping mechanisms and identifies the humanitarian and recovery priorities. 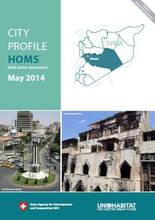