Dara'a is the central city of the Syrian southern region, located next to the borderline with Jordan. The precrisis population of Dara'a was approximately 117,000, and thus did not have a dominant population in the Governorate of Dara'a that had a population of 1,042,500 distributed in major secondary cities north and north west of Dara'a city.

However, the city of Dara'a enjoyed a dominant administrative and economic role, as its strategically located on the main national highway linking Syria with Jordan, and it enjoyed strong markets controlling the trade of the rich agricultural production of the Governorate. 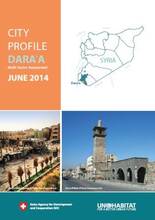