The crisis in Syria has had a significant effect on the country’s major cities, with large scale movements of population, damage to buildings and infrastructure and interruptions to markets. Cities represent multiple and inter-related formal and informal systems and need to be described and analysed in an integrated manner that captures the complexity of urban conditions. Up to now the majority of information available has been sector-wise, rather than integrated or area-wise.

The structure of the City Profile provides a pre 2011 baseline and current situation data to measure the impact of the crisis accompanied by narrative description and analysis. 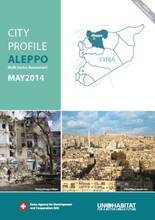