New York, 29 May 2014: United Nations Under-Secretary-General and UN-Habitat Executive Director, Dr Joan Clos, has said that “Cities and towns have been, and continue to be, crucibles of innovation and advancement”.

He made the comments at the first Integration Segment on sustainable urbanisation held by the UN Economic and Social Council at the UN headquarters in New York, which was opened by Ban Ki-moon, Secretary-General of the United Nations and John W. Ashe, President of the UN General Assembly and Vladimir Drobnjak, Vice-President of the Economic and Social Council. Keynote speeches were also made by Paul Kagame, President of the Republic of Rwanda, Angelino Garzon, Vice-President of Colombia and Michael Bloomberg, Former Mayor of New York City and UN Special Envoy for Cities and Climate Change.

The Integration Segments are designed to enhance the coherence of the three pillars of development – economic, environmental and social – in the run up to 2015 when new UN development goals will be established to replace the Millennium Development Goals which will have run their course.

Later today, Dr Clos will also speak at the closing session, outlining the way in which the discussions will be used to pave the way towards the United Nations Third Conference on Housing and Sustainable Urbanisation, Habitat III, scheduled to take place in 2016.

UN-Habitat are also holding a number of side events in the three-day conference, which ends today, covering topics including food security, green cities and participatory slum upgrading.

Speaking at a side event on gender equality, “Gender Equality, women’s empowerment and the realization of youth rights: opportunities for the new urban agenda”, UN-Habitat Deputy Executive Director, Aisa Kirabo Kacyira, urged the world to create cities that enable equality – not inequality – for women and youth. “Cities are ‘human-made’,” she added, “and we all have the responsibility to change them.”  You can watch the full webcast of the session here. 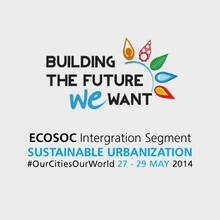