Yaoundé 26 March 2020 – Sixteen participants from various sectors (youth, young professionals, civil society) and different academic backgrounds took part in the first studio of the Cameroon Digital Urban Governance Lab.  This was part of the implementation of the UN Development Account (UNDA) funded project "Leaving No Place Behind: Strengthening Urban-Rural Linkages in Selected African Countries". The theme of the first studio is "Innovation and digital technology at the service of Cameroonian cities: Co-creation to design in teams innovative solutions to overcome the challenges facing Cameroonian cities”

Mr. Remy Sietchiping, Head of the Policy Legislation & Governance Section, UN-Habitat opened the session by thanking the participants for their attendance. He noted that the studio was the first of its kind and they were expected to come up with innovative and creative solutions. This was followed by the pre-session evaluation by Ms. Suzanne Koufana, UN-Habitat. The results showed that most of the participants were aware of the concept of digital urban governance and aimed to bring innovative solutions for Cameroon municipalities. 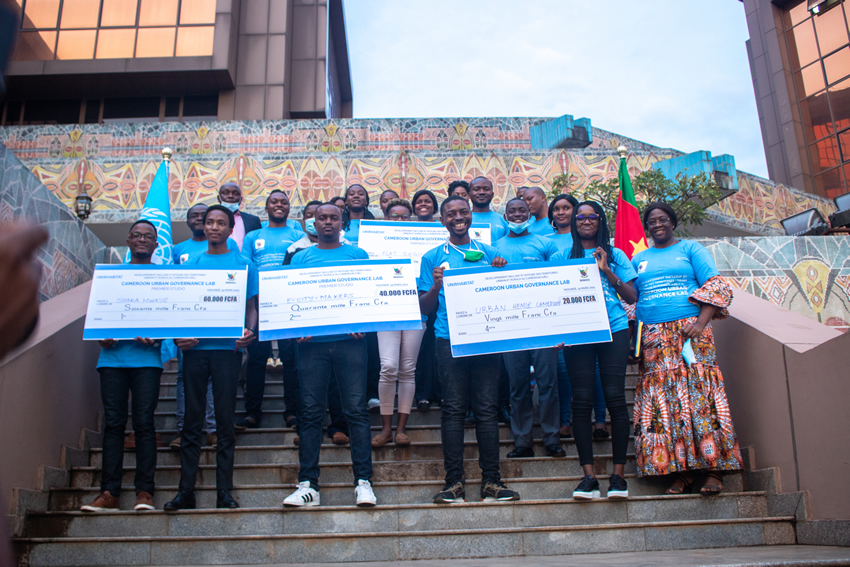 The plenary session started with a presentation of Mr.  Mangoua, from UN-Habitat. He introduced the concept of digital urban governance, the challenges faced by urban areas in Cameroon and some case studies in different contexts. Mr.  Jieutsa, UN-Habitat moderated the session starting by having the participants in four groups; Shaka Mwaye focusing on participatory financing of projects, Urban Hemle Cameroon focusing on equity of access to the decision-making process, Flat Beginners focusing on efficiency in access to urban services and the e-Cities-Makers focusing on transparency in land management.

During the second day, the teams conceptualized their ideas guided by Mr. Mangoua and Mr.  Jieutsa. The four teams then presented their proposals to a jury made up of Ms. Ledjou, the Head of the Division of Studies, Planning and Cooperation (DEPC) at the Ministry of Housing and Urban Development in Cameroon, Mr. Ngakam, Executive Secretary of the United Cities and Towns of Cameroon, Mr. Bouteu Thomas, Head of the Computer Science Department at the National Advanced School of Engineering of Yaoundé; and Mr. Mngoua of UN-Habitat. The Shaka Mwaye group proposed to create a platform Commune 2.0 with the aim to encourage participatory financing and the monitoring of community projects at the commune level. The team Flat Beginners, whose theme is efficiency in access to urban services: the case of water, proposed to establish a digital platform called Easy Connect, consisting of a mobile application for the population and a website for water administration to strengthen the public-private partnership in the supply of drinking water. The Urban Hemlè Cameroon team, targeting at the lack of communication and awareness between the population and the local authorities, proposed to set up an interactive platform to improve public participation in road projects. The e-City-Makers group proposed WebSIG, a platform that identifies and registers cadaster at the commune level to avoid land conflicts.

Following these presentations, the projects were evaluated based on the different criteria: the efficiency of the solutions, the feasibility and sustainability of the proposal and the potential impact of the project. The participants were issued with certificates and the best projects recognized.