Bridging the Affordability Gap: Towards a Financing Mechanism for Slum Upgrading at Scale in Nairobi 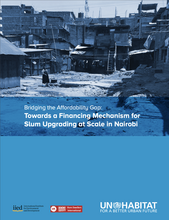 UN Habitat has previously defined informal settlements as residential areas where:
(i) Inhabitants have no security of tenure in the land or dwellings they inhabit, with modalities ranging from squatting to informal rental housing;
(ii) Neighbourhoods usually lack, or are cut off from, basic services and city infrastructure; and
(iii) Housing may not comply with current planning and building regulations and is often situated in geographically and environmentally hazardous areas.