Beirut Port explosion: a year on Lebanon's capital city struggles to pick up the pieces

Beirut, 4 August 2021 - One year after the devastating Beirut Port explosion has seen Lebanon’s capital city continue to struggle to pick up the pieces. According to a recent UN-Habitat assessment of 175 buildings within two kilometres of the explosion’s epicentre, 130 have either been completely or partially rehabilitated, 20 have been propped up with scaffolding and 25 have not been rehabilitated at all. 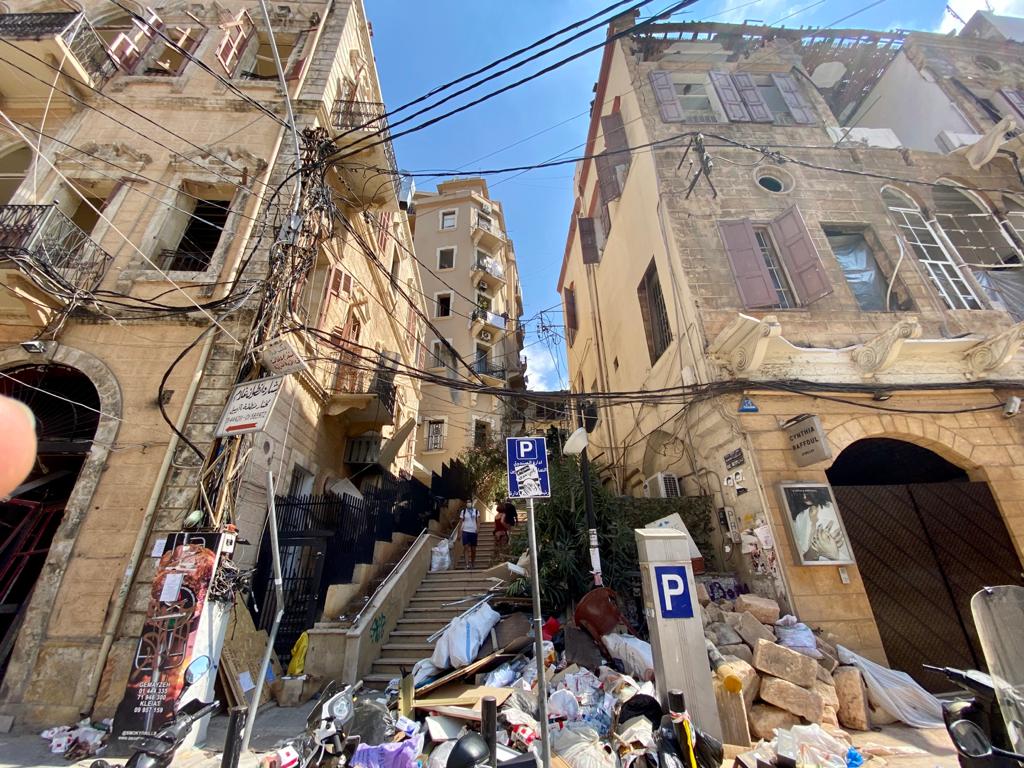 Rubble left by explosion at foot of stairs in Mar Mikhael, Beirut
UN-Habitat

“However, the built environment and urban fabric of the city – housing, public spaces and infrastructure, heritage, health and education services – continue to be pieced together through strong local and international initiatives, many spearheaded by civilians through support from the international community. The self-recovery of the city has been remarkable but, much remains to be done.”

The country continues to suffer a severe financial and economic crisis alongside a political stalemate. Hospitals and public services have been hit by shortages in electricity and fuel and prices continue to rise.

Some of the immediate needs that were present directly after the explosion remain. Access to safe and affordable housing has become even more scarce. The ongoing economic crisis has nearly doubled the price of quality construction materials such as aluminium and glass, resulting in many homeowners and landlords being unable to afford to repair their damaged homes. Due to the continuously depreciating currency rents are increasing with some landlords only accepting payment in US dollars.

Together with the United Nations family, UN-Habitat has and continues to contribute to improving living conditions for thousands of people who were directly affected by the explosion and continue to face hardships.

Areas of immediate intervention revolved around damage assessment, housing, education, healthcare and debris management. All projects implemented by UN-Habitat in response to the explosion ensured that the most marginalized were prioritized for support. Households led by women, refugees, migrants, the elderly, people living with disabilities and those struggling to make ends meet were identified and selected as priority beneficiaries for cash-for-shelter assistance, funded by the UN’s Central Emergency Response Fund. This supported 4,000 individuals, and a shelter repair project, funded by the International Islamic Charity Organization, in Rmeil and Nabaa, Bourj Hammoud respectively.

Jihan, mother and resident of Nabaa, Bourj Hammoud heads one of the 100 families (around 500 individuals) supported by UN-Habitat’s shelter repair project. The explosion left her home without windows or doors.

“Thank God, they [UN-Habitat] contacted me after the initial interview to arrange for a household visit to evaluate the damage and said that they were ready to help restore my home,” she said.

The National HIV and TB Centre in Karantina, Beirut, the country’s only health centre offering HIV and TB care is only one kilometre from the explosion’s epicentre and was severely damaged. Before the explosion, up to 1,000 patients visited the centre each month for free diagnosis and treatment and to collect their medication. One patient told UN-Habitat, that the Centre is possibly one of the best facilities in Lebanon that treats them respectfully without discrimination and stigma. Through the rehabilitation led by UN-Habitat and funded by the Swedish International Development Cooperation Agency, the centre is now structurally sound and fully self-reliant on its own electricity, sourced from solar energy.

UN-Habitat worked in Lebanon for more than a decade reconstructing homes devastated by the 2006 July war, advocating for an urban crisis response to the Syrian displacement crisis, implementing countless projects and today continues an urban recovery approach in Beirut. UN-Habitat’s technical know-how and expertise in urban crisis response and disaster risk management is critical as nearly 90 per cent of the population live in urban areas.

UN-Habitat is refocusing its efforts on larger scale interventions on housing rehabilitation and urban recovery in Beirut. One example through confirmed funding from Japan includes the restoration of 11 severely damaged multi-story residential in the heart of Beirut, including critical municipal infrastructure services in Bourj Hammoud. This project will reach around 7,165 individuals directly and 13,000 indirectly. A forthcoming housing, land and property assessment covering up to 500 households will further identify the challenges and needs of tenants whose housing rights may be at risk of violation.

Though the multiple protracted crises present different challenges, UN-Habitat’s approach is always people-centred, participatory, holistic, green and sustainable. This means ensuring that projects are implemented by and for the most vulnerable persons, by involving them in project design and delivery; ensuring that local authorities have the capacity and skills to maintain and grow these projects; and, that the overall recovery and reconstruction of Beirut and Lebanon feature targeted and evidence-based interventions. This has the ultimate aim of enabling people to live in dignity with access to urban basic services including, water and sanitation, electricity, housing, and much more.