Beirut explosion, six months on. UN-Habitat’s response and what lies ahead

By Taina Christiansen, Head of the UN-Habitat Lebanon Country Programme

Beirut, Lebanon, 26 February 2021 -  More than six months have passed since the Beirut Port explosion, which changed the city forever. As the humanitarian response phase comes to a close, moving to longer-term recovery and reconstruction of a city that is barely coping with the multiple and interminable other crises facing Lebanon – UN-Habitat continues to engage on multiple fronts, aimed at enabling and contributing to a wider urban recovery at scale, while considering the multi-sector efforts necessary to do so.

The emergency phase saw a United Nations Flash Appeal funded at just over 80 per cent (USD 158.7 million  received out of 196.6 million requested), responding to the most urgent humanitarian needs across six key sectors: shelter; protection; water, sanitation and hygiene; health; food security and education. As projects under the Flash Appeal are being wrapped up, they have set the stage for longer-term recovery and reconstruction – principally captured under a Lebanon Reform, Recovery and Reconstruction Framework (3RF) – jointly prepared by the World Bank, the European Union and the United Nations. The 3RF is part of a comprehensive response to the explosion. It is a people-centred recovery and reconstruction framework aimed at bridging the immediate humanitarian response and the medium-term recovery and reconstruction efforts to put Lebanon on a path of sustainable development.

The COVID-19 outbreak remains a massive public health emergency. As community transmission continues to increase, triggering a complete lockdown since mid-January 2021, the effects of the pandemic weigh heavy on a country in severe socio-economic and financial crisis. This places hundreds of thousands of people, especially those relying on daily work within the informal economy, in a precarious situation. The situation is creating new humanitarian needs and exacerbating current ones. With 60 per cent unemployment rates in some neighbourhoods, many are going hungry and are at risk of eviction resulting in street demonstrations.

UN-Habitat continues to contribute to the wider international community’s response, through multiple interventions. This includes ensuring that people have their most basic shelter needs met, undertaking housing repairs, rehabilitating schools and health care facilities, applying an environmental approach to debris management, while working in coordination with local authorities, communities and UN and non-UN actors who form part of the wider response and urban recovery efforts.

Contributing with coordination, technical and assessment expertise from the outset

Over the past 18 months, local authorities have been at the forefront of the response to multiple crises. To support them, UN-Habitat quickly acted to support the municipalities most blast-affected: Beirut and Bourj Hammoud – joining a vast network of humanitarian and non-humanitarian partners to facilitate the immediate response, recovery and reconstruction processes associated with the aftermath of the blast. 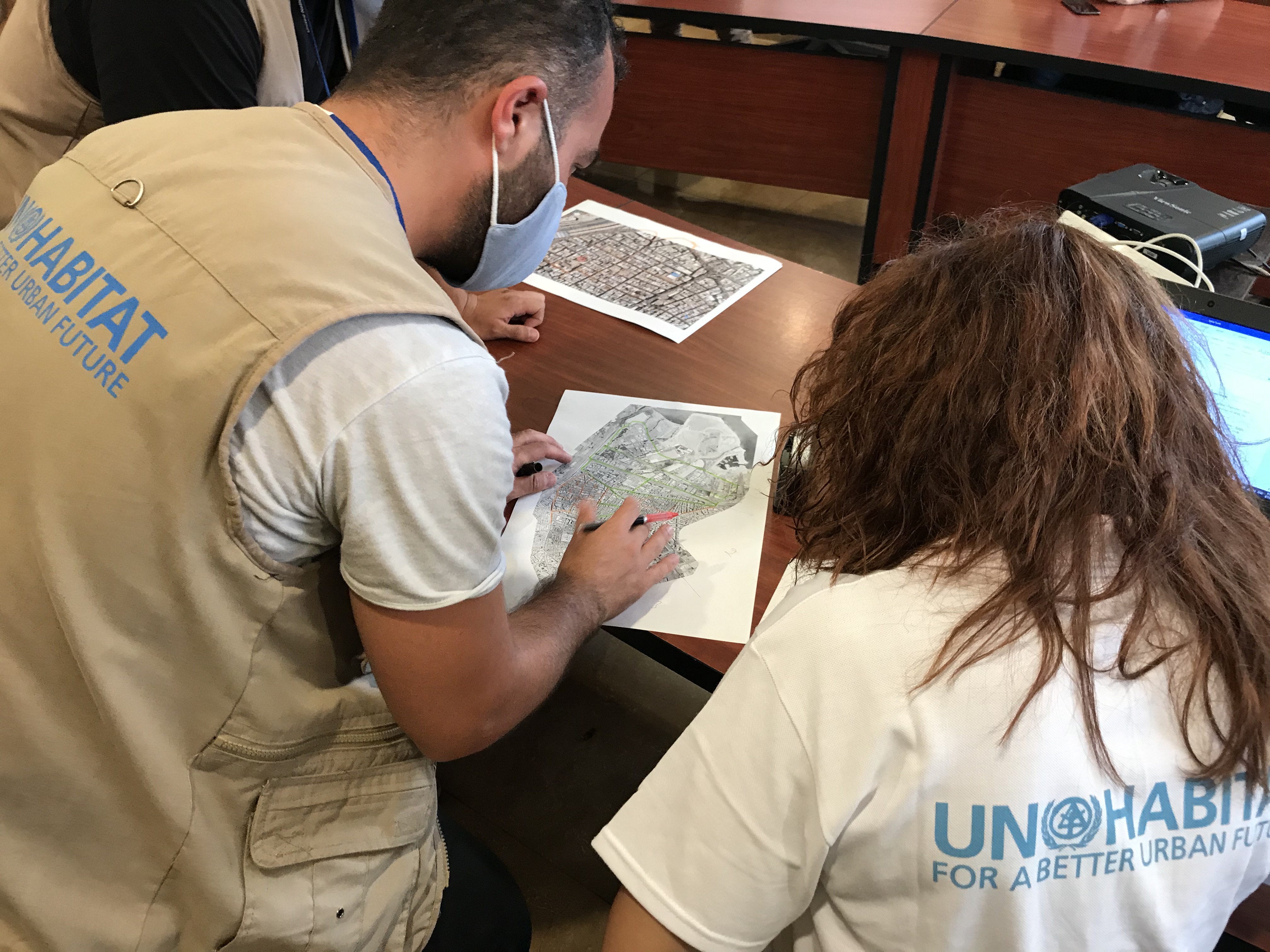 During the urgent initial response UN-Habitat deployed immediate technical expertise to the municipalities most impacted by the blast: Beirut and Bourj Hammoud, and undertook damage assessments of buildings using the Geopal platform supplied by Rotary Club Beirut Cedars (one for Beirut and another in Bourj Hammoud), households and schools to establish an overview and baseline of the level of support needed in the two areas. UN-Habitat has also contributed with its mapped data collected during the rapid building-level damage assessments to the European Union’s Copernicus Emergency Management Service (EMS), in order to validate their spatial data/maps produced for the Beirut blast.

These assessment findings continue to inform the prioritization of partner interventions to date. Through an assessment undertaken by UN-Habitat of 113 private schools, and through funding support from UNESCO, UN-Habitat is currently overseeing the rehabilitation of up to 23 schools in Beirut and Mount Lebanon.

As part of the Beirut explosion coordination mechanism established by the Humanitarian Coordinator, UN-Habitat deployed expertise through NORCAP (a global provider of humanitarian and development expertise, operated by the Norwegian Refugee Council and funded by the Norwegian government) support to co-lead the Shelter Sector with UNHCR and the Norwegian Refugee Council – ensuring expertise in urban crisis response and disaster management is contributing to the sector’s overall coordination. Additional support from NORCAP led to further human resource expertise deployed, focused on housing, land and property rights – issues which will remain at the fore particularly in Beirut, as recovery and reconstruction progress in the months and years to come. Further to complementing immediate humanitarian coordination expertise, UN-Habitat engaged additional technical expertise in the content development of the 3RF, through co-leading each of the housing, culture, and municipal services sectors, providing tangible guidance and inputs to the framework based on the agency’s first-hand experience.

At the request of the Municipality of Beirut, UN-Habitat assessed more than 80 severely damaged buildings from which residents were asked to evacuate. These assessments formed the basis of an emergency cash-for-rent project implemented by UN-Habitat, funded by the United Nations Central Emergency Response Fund. This intervention provides 810 eligible households with safe shelter options for four months, helping families get back on their feet. UN-Habitat’s engagement has been recognized by Marwan Abboud, the Governor of Beirut, specifically for the agency’s contribution to securing temporary housing for people until they can return to their homes in a dignified manner. 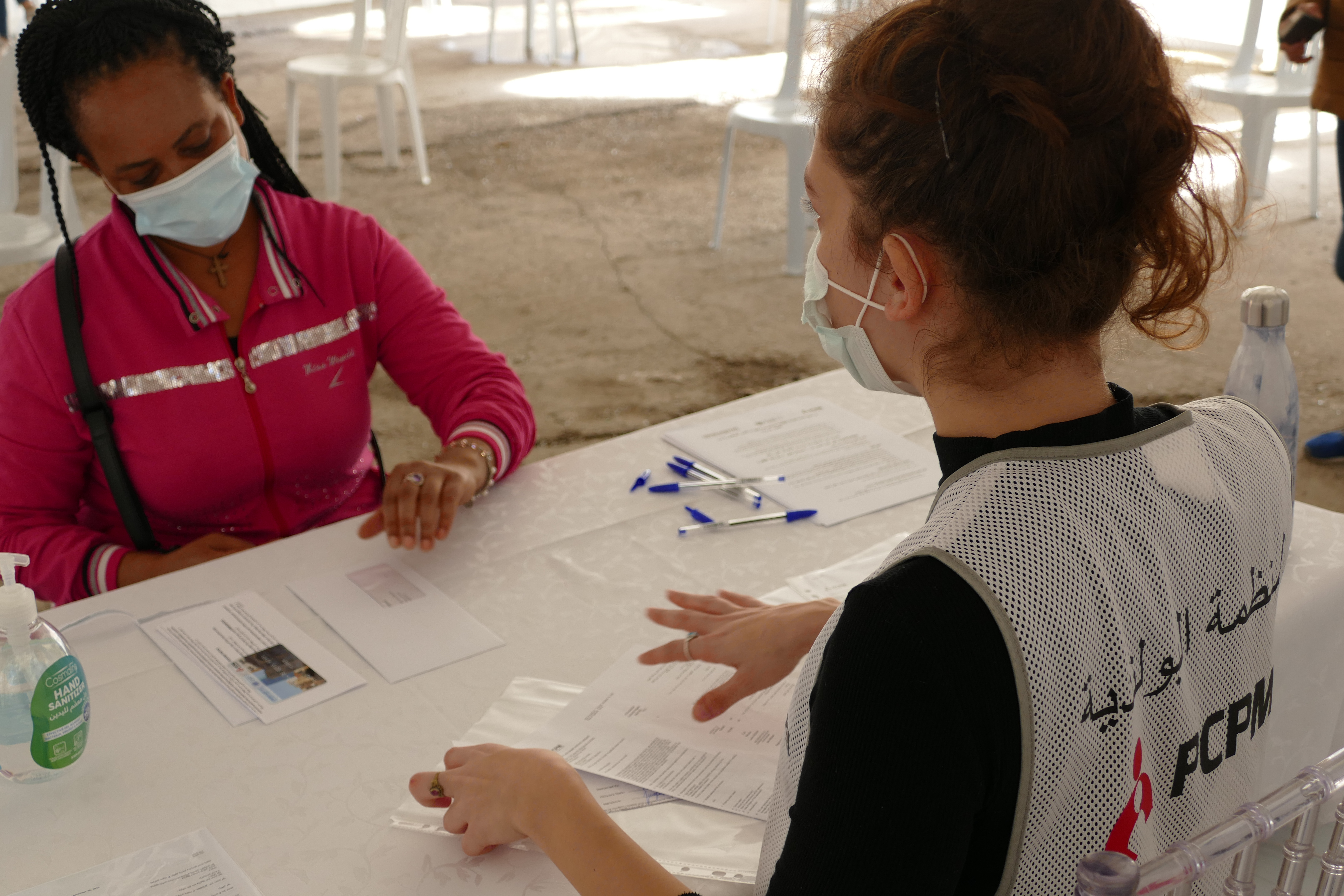 Beneficiary of the CERF-funded cash-for-rent project signs an agreement to facilitate her receipt of funds to cover four months rent.
[UN-Habitat Lebanon]

In addition to the cash-for-rent and private schools renovation projects, UN-Habitat is undertaking minor repairs to more than 100 homes in neighbourhoods severely affected by the blast through funding from the International Islamic Charity Organization (IICO) and the Real Estate Syndicate of Lebanon. By repairing windows and doors that were destroyed by the blast, residents were protected from harsh weather throughout the winter season. During the lockdown, UN-Habitat has been speaking to the beneficiaries by phone to facilitate continued assessment and validation of the repair work.

The blast also severely damaged medical centres and hospitals making many unusable. This includes the only national HIV and TB Centre in Lebanon which was close to the port. UN-Habitat, funded by the Swedish International Development Cooperation Agency, is rehabilitating the centre through a build back better approach – making it green through the introduction of renewable energy, accessible to all and more connected to the community through small public spaces. 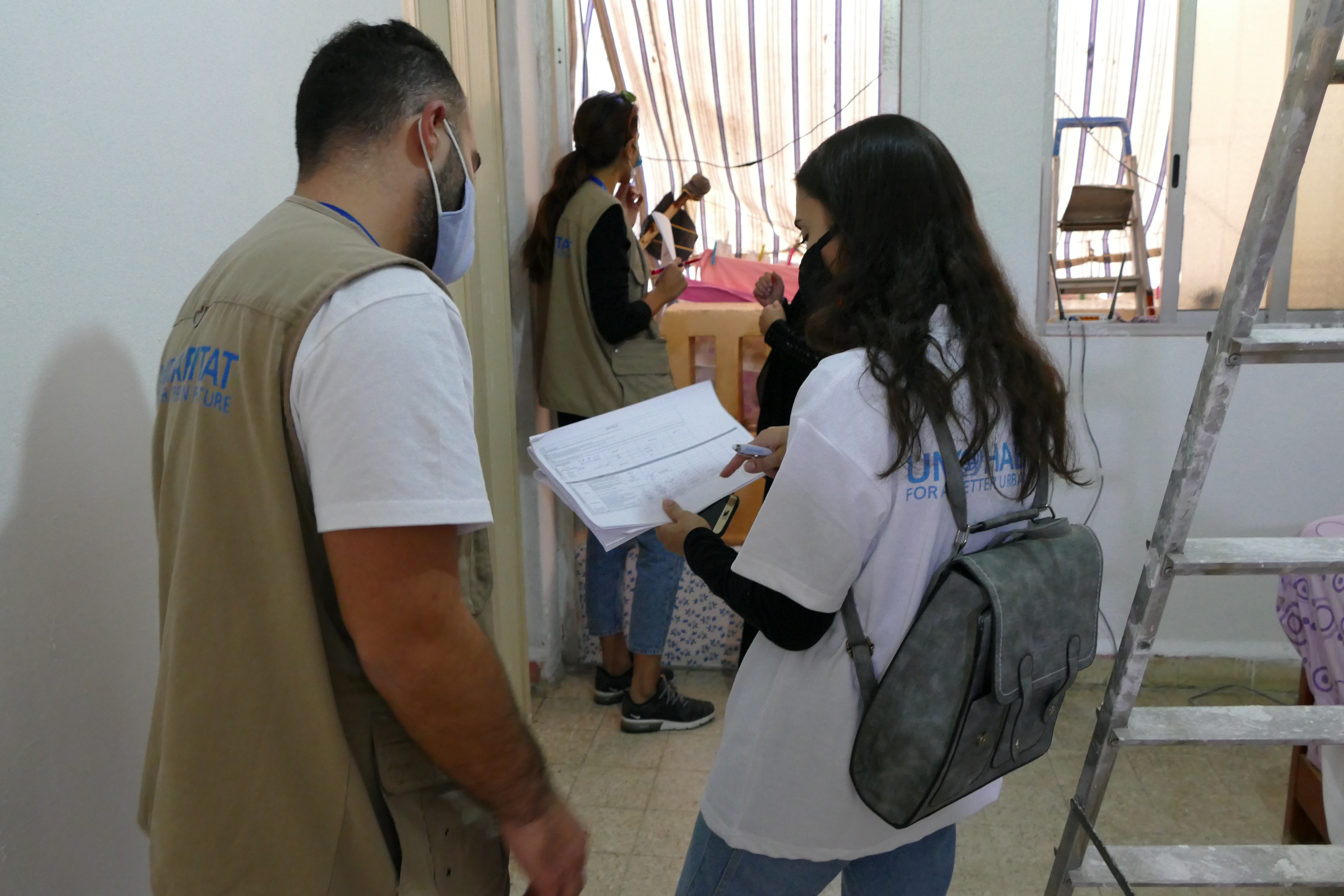 Volunteer from Lebanese University Task Force and UN-Habitat Lebanon staff conduct an eligibility assessment in one of the homes shortlisted to possibly benefit from the Kuwait-IICO funded project.
[UN-Habitat Lebanon]

Beyond the immediate response to the most pressing needs, lies the challenge of the protracted housing situation. The destruction caused by the Beirut port blast has revived fears of a controversial reconstruction such as seen after the end of the civil war in 1990, which severely impacted Beirut’s heritage buildings. The remaining historic areas of the city currently accommodate residents of all income levels and despite legislative efforts at the national level to prevent housing, land and property (HLP) violations – medium to long term risks remain linked to the reconstruction of impacted housing. Aside from ensuring continued advocacy and mainstreaming of HLP issues through integrated programming and expertise across the shelter response, UN-Habitat will directly lead on the rehabilitation of multiple structurally damaged heritage buildings during 2021. This direct engagement, which requires collaboration across national and local authorities, will allow enhanced technical expertise and awareness not only on safeguarding HLP issues, but also on building back better, through green and resilient approaches. An in-depth HLP assessment of targeted Beirut Blast impacted areas will also be undertaken during the first quarter of 2021, in order to validate anecdotal evidence that evictions are on the ride, including a pattern of HLP right violations taking place.

As efforts around the implementation of the 3RF take hold, reinforced by a multi-donor financing facility – the Lebanon Financing Facility – UN-Habitat together with other UN agencies, will continue to engage in operationalizing recovery and reconstruction priorities under the housing, culture and environment sectors. These will evolve over the course of 2021 – with longer-term programming and focus on policy elaboration at the national level in mind.

UN-Habitat’s long-term vision of multi-sector engagement within the recovery efforts following the Beirut blast is holistic, evidence-based, multisectoral and city-wide. The approach UN-Habitat envisions recognizes the need for both immediate response and longer-term adaptive and transformative measures for a crisis, considering pre-existing vulnerabilities, current needs, gaps, and priorities. Building on regional experiences in developing Urban Recovery Frameworks in Syria, Iraq, and Yemen, this participatory approach to crises response and planning efforts by national and decentralized governments, can help localize and operationalize existing relevant frameworks. In the case of Lebanon, the soon to be launched Beirut City Profile will act as a diagnostic tool and common foundation for longer-term recovery for Beirut at scale.

UN-Habitat has initiated the development of a URF that can assist the long-term recovery and reconstruction of Beirut, beyond the explosion, fully encompassing the 3RF and other pre-existing humanitarian and development frameworks, and with a view to replicate the tool in other cities in Lebanon, which have experienced repeated shocks over many years.

To learn more about UN-Habitat’s response, please visit this photo album to see an overview of UN-Habitat’s work on the ground following the Beirut blast.