This paper explores on how one of the most vulnerable populations in Beirut, Syrian refugees,1 realise their security interests in the face of both the threat and actuality of violence, within plural provision arrangements.
It focuses on the local dynamics in two neighbourhoods of metropolitan Beirut, which are not necessarily found elsewhere in Lebanon; contrasts Syrian security perceptions and practices with those of Lebanese citizens in the same urban spaces; and highlights the role of local governance actors in the politics of security provision, specifically their role in facilitating access to security and the accountability of security providers. 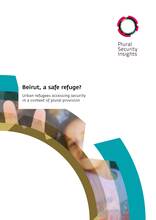