The Baidoa Urban Profile is part of a series of working paper summarizing major aspects of an urban analysis from the spatial prospective for elaborating on solutions for long term urban development and current displacement crisis in Somalia.

That includes considerations of the development potentials and constraints with a time horizon of five to ten years.

Baidoa has the highest record of drought related displacement and the cumulative urban population has more than doubled in the last year. These numbers are compounded by an already high number of IDP's settled in towns, and an urban population in dire constraints, with already high pressure on resources, settlements and livelihood options. The paper tries to capture the main settlement topics and link them to the demands of the various communities living in town (including returnees, IDPs and host community).

The profile was developed under the Midnimo Programme jointly implemented by International Organisation for Migration (IOM) and the United Nation Human Settlements Programme (UN-Habitat), which support the Attainment of Durable Solutions in Areas Impacted by Displacement and Returns in Jubaland and South West States. It stems from a newly established UN Peacebuilding

Programme and aligns itself with broader peacebuilding and stabilization objectives championed by the Ministry of Internal and Federal Affairs and Regional Authorities in Jubaland and South West States. 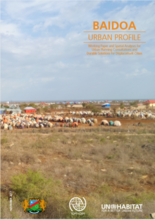