Nairobi, 28 October 2014-- Nigeria and Cameroun recently held their first ever urban forums, underpinning the importance of such events as the world heads to the Habitat III Conference.It was remarkable that the two national urban forums were held as part of the World Habitat Day 2014 which was also part of the Urban October, the month UN-Habitat set aside to highlight urbanization issues in the world.In the Nigeria forum, the Federal Government announced plans to redefine and scale up slum upgrading efforts toward confronting challenges of expanding urban areas in the country. In the renewed action plan, the government is also proposing a vibrant platform to give a voice to the growing segment of slum communities, which would also act as a permanent communication vehicle to enable slum dwellers, urban managers and technocrats share experiences on both past slum improvement efforts and emerging best practices to achieve better result for the future.The Forum was held at the same time as the 2014 World Habitat Day (WHD) commemoration and was organised by the Federal Ministry of Lands, Housing and Urban Development in Abuja. Similarly, Director and Chief Scientific Advisor, UN-Habitat, Prof. Banji Oyelaran-Oyeyinka presented the lead paper for the WHD while Mrs. Mariam Yunusa, Head, Partners and Inter-Agency Coordination Branch, UN-Habitat also spoke on Beyond Habitat III: The African Urban Agenda as a transformative Force of Africa’s Development.The studies commissioned by the ministry on this year’s theme ‘Voices from Slums’, handled by the Foundation for Development and Environmental Initiatives (FDI) recommended the improving of livelihoods of slum dwellers, provision of basic infrastructure, regularization of titles in slum communities, mobilizing finance for slum upgrading and participatory approach to development in the affected cities.Minister of Lands, Housing and Urban Development, Mrs. Akon Eyakenyi who addressed well-attended gathering of stakeholders at the programme, said that “ the reality that slums co-exist with well-planned areas in most of our cities is worrisome. The commemoration, therefore affords us the opportunity to work together to remedy this unpleasant situation.” She charged the experts and all stakeholders to hear the voices of slum residents and ensure that their genuine concerns are effectively addressed with a view to significantly improving their livelihoods. “Ultimately, we will not be simply hearing them speak, but also revigorating partnerships amongst stakeholders and speeding up the process of integrating slum communities with the rest of the city.”

Meanwhile, Cameroun also held its first National Urban Forum which was said to be driven by a strong political will to anticipate the effects of the rapid urbanization prevailing in the country and to ensure harmonious and sustainable development. The meeting was opened by the Minister for Housing and Urban Development, Mr. Jean Claude Mbentchou who said that at present, Cameroon is proud to organize a national urban forum, which affords experts, practitioners and policy makers the opportunity to discuss and brainstorm on urban policy reform and on how our cities are managed.UN-Habitat had a strong delegation to the meeting led by Senior Human Settlements Officer Mr. Doudou Mbye, and integrated by experts in Urban Governance, Planning and energy who reaffirmed UN-Habitat's determination to continue providing technical support for the country to address the urban challenges and towards strengthening the Forum's role as the main advocacy platform for sustainable urbanization , ensuring international linkages with global strategies like the Post-2015 Development Agenda and the New Urban Agenda to be defined in 2016. In his speech, Minister Mbentchou underscored the importance of urban sector in his country.“The urban sector in Cameroon accounts for about 65% of national GDP, which explains the importance of urban development in our country. We clearly see that urbanisation is a positive force that has to be harnessed to guarante social equality, cultural vitality, economic prosperity and environmental security, “he said. According to Mr. Mbentchou, urbanisation opens up rich and conplex prospects for a “sustainable” and shared future. Cities are thus a matchless asset in our quest for sustainable development since their dynamics can help us cope with the major challenges of the planet."It is on the strength of the foregoing that the theme of this Forum is: Planning and managing urban development: the time for action is now,” he said, adding, :we know that urban management, which is to be achieved through planning and programming, consists in creating conditions that will enable the city to perform its three functions, namely the residential function, the administrative and cultural function and the economic function.” 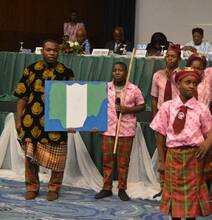