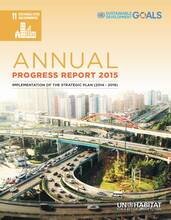 The 2015 Annual Progress Report marks the second update on the implementation of the six-year strategic plan for 2014-2019 approved by UN-Habitat’s Governing Council in April 2013, and is in accordance with Governing Council resolution 25/3 of April 2015. This report also informs on progress made on the implementation of the first biennial Work Programme and Budget 2014-2015.

The Executive Summary draws out UN-Habitat’s results in 2015 the strategic plan, particularly in its evolution towards the principles of sustainable urbanization and the three-pronged approach in its programme, and also in the demonstration of the principles likely to result in the final New Urban Agenda adopted by member states later this year at Habitat III. The strategic plan is being implemented through three successive biennial strategic frameworks and programme budgets (GC resolution 24/15).