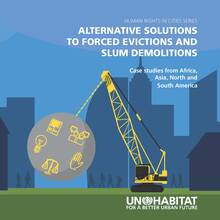 Globally, poverty in urban areas is evident in the proliferation of slums and informal settlements. In 2001, 47% of the world’s population lived in urban areas, and it was expected that the number would reach over 56% within the next two decades,1 with a billion-people living in a slum.2 Moreover, at least 2 million people in the world are forcibly evicted every year, while millions are threatened with forced evictions. These issues continue to persist despite the fact that the right to adequate housing is guaranteed to all and a prerequisite to inclusive and sustainable urban centers.