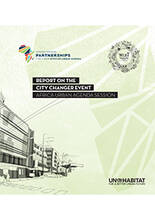 The African Urban Agenda (AUA) is an initiative by UN-Habitat tailored to establish and strengthenpartnerships between state and non-state actors towards advancing a new urban agenda. The project aims at raising the profile of urbanization as an imperative for development in Africa. It contributes to promoting democratic governance through mobilization, sensitization and strengthening of non-state actors to partner effectively with the national governments of sub-Sahara African countries in articulating Africa’s priorities for the next 20 years with a focus on a transformative national urbanpolicy, compact cities at a human scale, undertaking institutional and legal reform and improved collaboration.It also aims at building an understanding between non-state actors and national governments, thereby building an African consensus with a strong momentum of support for a continent-wide urban agenda for the next 20 years.The project will especially contribute to building collaboration between state and non-state actors through inclusive and participatory preparation for the Post-2015 agenda and national reports for Habitat III, creating a strong balance for the urbanization tripod of Government, CSOs-including academia and the private sector.

View it in French.