200,000 IDPs and their hosts take over basic service facilities such as water, sanitation, flood control and agricultural materials from Japan and UN-Habitat

UN-Habitat’s projects in South Sudan show that infrastructure and participatory planning provide a preventative – rather than curative – approach to long-term conflict resolution and peace building.

With funding from the Government of Japan, UN-Habitat supported living conditions of IDPs and returnees with flood prevention, water and sanitation and livelihood facilities in a project that lasted for nearly two years until December 2016. At the end of the project, representatives of the Government of Japan and UN-Habitat, together with the Under-secretary of Lands, Housing and Urban Development, and the Acting Under-secretary of Humanitarian Affairs and Disaster Management, inaugurated these communal facilities that have been installed as a fruit of successful community dialogue.

They serve as a nexus between IDPs and returnees and host communities and a symbol of promotion of community integration. The facilities handed over to the local communities in the outskirts of cities of Juba and Wau include communal piped water supply systems, toilet facilities, flood control systems, community road expansion and grading, a community centre, and agricultural implement and equipment for 200,000 IDPs and refugees, and their host communities. The facility provision was intended to help residents build a more resilient and integrated communities with secure sources of livelihood.

Currently, one in four South Sudanese faces displacement and inadequate hygiene conditions. IDPs and returnees in particular end up finding themselves settling in marginal land most prone to flooding. At the same time, livelihood opportunities in communities are getting scarcer. The country has been facing critical food shortages, a down-spiraling economy, and a continued struggle of reintegrating IDPs and returnees with host communities.

The plight of the large number of households affected by the recurrent flood incidences and disputes between settlers and newcomers over the years came to the attention of the Government of Japan. UN-Habitat solicited $2.4 million funds to implement a project in Gureii and Alel Chok, areas of recent urban sprawl with high frequencies of flooding. Thus, the project was a test to facilitation of settlement and integration on a permanent basis of IDPs and returnees into their respective communities.

Key measures to enable integration were strengthened inclusive community organization, participatory planning of all stakeholders, and training to protect and manage communal assets so that benefits of public services are felt by all.

In her keynote remarks at the hand-over ceremony in December 2016, Ms Roda Kuch Achol representing the Minister of Lands, Housing, and Urban Development, said: “You can see the happiness of the citizens of Gureii indicating that this project has really been accepted by the community. We are very thankful to the Government of Japan for this assistance and hope that this is a beginning of more infrastructure development interventions in Juba and other parts of South Sudan.”

In his congratulatory remarks, Shigeru Hamano, Charge d’Affaires of the Embassy of Japan in South Sudan , said that Japan is committed to working with the international community, including UN-Habitat, in helping the Government and the people of South Sudan manage post-conflict challenges and develop infrastructure to meet basic needs using Japanese models and experiences, not only to combat flood disasters but also to bring about sustainable development.

“At a critically challenging time for South Sudan’s nation-building, with 3 million displaced population to be accommodated back in communities, our project gives us a hint to how we may cope with man-made disasters and herald the advent of peace by restoring community cohesion through the harmonious management of communal assets. I sincerely hope that this nation leaves an exemplary case just like Gurei did to render the name South Sudan a synonym for reintegration and reconstruction,” Mr. Shigeru emphasized.

Christian Okafor, UN-Habitat South Sudan’s project manager, said: “We are pleased to announce that these interventions are working well. We are looking beyond quick-fix solutions. We want solutions that help IDPs, returnees and host communities become more self-reliant and less dependent on Government and other humanitarian assistance agencies in the long run. This is the main objective of the UN- Habitat’s community led participatory approach.”

“You can see the people have come out, all the children, men, women, young and old, are here to show you that they are happy with this project,” said Pitya Nathaniel, Chief of Rombur Community- Gureii. 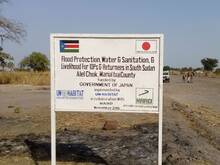 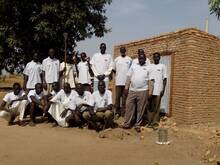 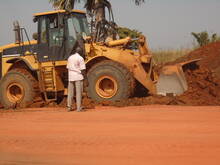 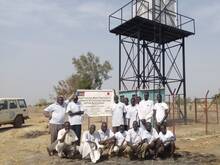 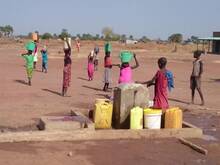