The annual rate of population growth in the last census period (2001-2010) has reached 7.6%, the country’s population is projected to reach 2.2 million by 2030. The youth population aged between15-30 years comprises 30% of the total population; thus the Kingdom of Bahrain has embarked on the development of appropriate initiatives and schemes to meet the social, cultural and economic needs of this group in recognition of its significance as a human capital and a dividend that has the potential for achieving sustainable development. As a result, the National Youth Strategy has been developed, highlighting the needs of the youth and their right to participate in the public life as well as their role in building the future through the implementation of a number of political and economic empowerment initiatives. 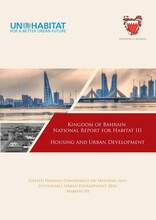