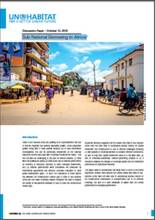 Cities in sub-Saharan Africa are growing at an unprecedented rate due to internal migration and general population growth. Urban population growth brings with it many positive benefits, but in cash-constrained municipalities, this can be particularly problematic as the financial resources cannot keep pace with municipal infrastructure needs. This had not been as challenging in the past for several reasons:
(1) cities were not growing as rapidly,
(2) cities could rely on national governments for transfers of resources sufficient to meet municipal investments, and
(3) national governments were themselves not pressured by international agreements and external, unfunded mandates to meet global development goals.

Academic literature suggests that the reason that cities in sub-Saharan Africa have not been able to successfully access finance for capital investment into infrastructure is due to internal challenges including:
(1) low capacity of municipal workers to consider different instruments,
(2) lack of long-term capital investment plans at a city-wide level,
(3) lack of financially-sustainable, revenue-generating projects or
(4) a mismatch between the lifespan of municipal assets and the investment preferences of institutional investors.

This paper seeks to demonstrate that while there is much in the extant arguments, another often-ignored but critical reason why cities in sub-Saharan Africa have not been able to successfully access finance for the infrastructure investments is predominantly due to an extrinsic challenge: the lack of a clear devolution of power from the central government to municipal government.